Male Survivors Are Victims Too 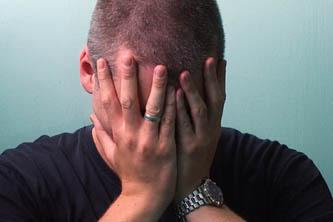 By Lavinia Masters
He sat on the edge of the hospital bed clothed only in a thin hospital gown that opened from the back. His face was that of a frightened little boy that was in fact a tormented young man. The police stood over him as they wrote out his horrendous account if his traumatic acts of sexual violence against him. As his aunt sat quietly in the corner you could not only see the pain in her eyes but the vacant expression as she wondered how could her own family member manipulate, abuse and sodomize their own flesh and blood?

He was only 14 years old and the abuse had began at the tender age of 8 years old when the abuser uncle had moved in with his other aunt and uncle that he now resided with. He had to move in with his relatives because he had already suffered enough in a home of a mother that was a crack addict and a man that he only knew as a “dead beat dad”. He had already come from hell… only to coexist with the devil himself.

The night I entered that hospital room, I had to do a double take because although I knew that sexual abuse was not a known discriminator, I had never personally encountered a male victim myself. There before me was a young boy that just wanted to be normal yet did not want to cause any further harm or destruction to his family. Why did he try to take on such a major responsibility? Why did he feel that he was the one that needed to protect the family especially after what his family has taken him through? He was just a boy and as I looked at him on the edge of that bed, I was able to see that he was no longer a young boy that was sodomized by his uncle in a disgusting act of sexual abuse but that he was another child that had been a “victim” of sexual abuse.

Male survivors of sexual abuse are more prevalent than what I think we actually know and want to believe. It is the same as we know and realize that the counts of sexual violent crimes against children are not only high but alarming and over 50% of them are not reported. The effects of sexual abuse can be very confusing for children. For a child, it often involves being used or hurt by a trusted adult. The child might learn that the only way to get attention or love is to give something sexual or give up their self-respect. No child should have to live this way…female or male.

I watched this young man tell his story as I felt the horror that he tried to hide with a face of numbness. My heart connected with his…not only as a survivor of sexual violence but as a mother that was grieving for her child. He needed to know that everything that happened to him over the course of the last 6 years was not his fault and in spite of it all that everything was going to be alright. He needed someone to listen openly and judge silently. He wanted someone to say I am here for you physically and be there for him mentally and spiritually…he needed me.

When the police finally made their reports and prepared for the arrest of this monster that was known to him as his uncle… the SANE nurse finally came to take him away for his exam. He looked to me as if he needed some form of approval from me and as I nodded my head, I told him that he will be alright and to trust that the nurse would not harm him. With that she rolled him away and I along with his aunt awaited his return to the room. As I watched him being wheeled away I could not help but think about my own son having to face a gruesome destiny such as this.

He entered this world as an innocent child but is living the life of an adult that has endured many afflictions. He did not ask for the abuse nor did he ask for the hurt or shame but unfortunately this was hand the hand that he was dealt and his job now is just trying to survive. He was a young man born of a woman and he is now a young victim scarred by the affects of sexual violence. The abuse saw no gender, the abuse saw no age, the abuse only saw an opportunity and the abuse violated a child and left him living the life of a victim.

He returned to the room and in his eyes I saw the same look of re-victimization that I had when through at the age of 13 years old after my SANE exam following my assault. I shared this painful story with him and I told him that I knew what he was going through. Perplexed was the next look I received as he tried to comprehend the peace that now took over my demeanor after enduring sexual violence as a child. I explained to him all my past feelings and disgusts but that now I am just as normal and at peace after my own “healing” after sexual trauma and assured him that he could be too.

We talked awhile longer and as he shed a few tears he was able to replace them with laughter because he now realized that as we shared openly that he had begun to unlock the chains that had locked him in his silence for far too long! In that moment he saw that he was able to rise above the hurt, humiliation and trauma that sexual abuse caused. He had actually begun to feel free, he had actually began to believe that he could become whole again and that if he could just hold on a little while longer that everything would be restored.

As I prepared to depart that night, I gave him a teddy bear and packet of resources and referrals to get him started on his road to recovery. I then gave him a hug and as he squeezed me tightly with a heart full of gratitude, he said I love you… and at that moment I believed that male survivors can be victims too. This is a myth that has been instilled through masculine gender socialization and sometimes referred to as the "macho image," declaring that males, even young boys, are not supposed to be victims or even vulnerable. When in all honesty, boys are children…and just like girls they are weaker and more vulnerable than their perpetrators.

So you can imagine how I applaud and thank Oprah Winfrey and Tyler Perry as they bring over 200 men together to speak up and out about their abuse. I am also excited that I am not a lone ranger in offering support and prayer to male survivors as they battle with the many demons of sexual trauma because unfortunately males may be more damaged by society's refusal or reluctance to accept their victimization, and by their resultant belief that they must "tough it out" in silence. No one should have to suffer or “tough it out” in silence…especially a child…whether it’s a boy or a girl.

When rain falls it does not know whether it is falling on all the little boys or little girls in the world such as the sun shining…gender has never been a reason for it to discriminate. Moreover the moon gives light to all that is under its covering as well as the stars share their illumination upon every species in this world. So is the devastating and non discriminatory ways of sexual abuse…when it affects one it affects us all. Remembering as an advocate we are to advocate for justice, healing, empowerment, awareness and peace for all victims…including males.
at 8:15 AM