The first time I became aware of house arrest and ankle bracelets was watching the 2007 suspense thriller movie “Disturbia”. The lead young man “Kale”, played by Shai LeBeouf, went stir crazy because he was not allowed to leave his house. Kale is on house arrest for a minor infraction, the story has a beautiful girl and a murderer living next door. It’s a little like Rear Window with a twist. A very bored Kale decides to spy on his neighbors, one who just happens to be a serial killer. Hence the title of the movie “Disturbia” - after all even killers have to live next door to someone. 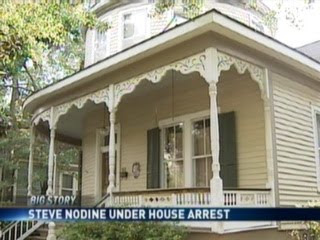 What Is House Arrest?

According to ehow.com - A arrest is an alternative form of incarceration in which the prisoner serves his or her sentence while in the confines of his or her home. House arrest is utilized in few cases. These cases usually involve a low degree of seriousness; thus, crimes such as murder and manslaughter usually do not qualify for consideration of house-arrest sentencing.

This is of course unless you live on Georgia St. in Midtown “Disturbia” where an accused murderer can live right next door. If you live in this neighborhood just don’t stumble across any secrets that could just cost you your life. Remember the quote from the movie, “He’s hiding something and he knows that we know that.” 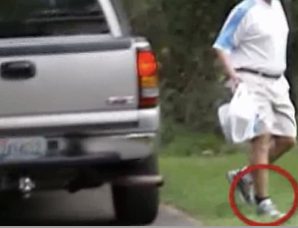 In a "Life imitates Art far more than Art imitates Life" funny kind-of-way, Steve Nodine was recently released and placed on house arrest in Midtown Mobile, AL. Unlike Kale, Nodine is no young man (he turned 47 last week). He isn’t on house arrest for a minor infraction, he’s accused of murdering a beautiful woman named Angel Downs. The neighbors don’t like thinking they are living next door to an accused killer.

“Do you think he sees us?” “No but he feels us watching.” is what I imagine is being said between the media and law enforcement as they sit on stakeout watching Stealth Steve.

I just saw Nodine stroll into Spot of Tea with a "Y'all keep praying" sign-off to 2 greeters. Drove away in a mini- SUV after spending 3 minutes inside. Weds 6/23/2010

Nodine was spotted at Griffith Shell this morning filling up his interestingly-named Ford Escape. He was dressed for business and chatting up customers. Tues 6/22/2010 9:01am

Those who know of Nodine’s penchant for womanizing won’t think it odd that he may also be looking for a new pigeon to prey on - albeit online. Rumor is his Match.com ID might be Beach47M, and profile says “Lets get on with life. We all have issues and hurdels, so lets jump over them and enjoy life.” Comforting to think he’s so understanding, isn’t it?

Where else do you get this kind of entertainment?

Nodine has a visible Facebook page, complete with an orange glo Steve on Orange Beach (Man Tan) His sister Laura Coffey commented on Steve's status after July 6th. Something about her baking him a cake with toenail shavings in it. Steve's witty comeback was something like - probably but out of the joint with those toes shaving instead of file :)

The cake was in honor of Nodine’s 47th birthday. Gossip at the gas station was Steve was having a party at his new digs - Lynam’s house, with an open bar. It was reported that Steve wouldn’t be drinking, not because he’s turned over a new leaf, but because he can’t. Some say his GPS Bio Sensor ankle bracelet not only knows where he is but may also know and if he has any alcohol enter his system. Other's say it's not a bio-sensor just GPS. A small consolation (see questions below)

Last Fri night John Lynam was said to be entertaining the friends of Steve Nodine. Spare no expense. It’s costing John his regularly scheduled visitation with his own children. Isn't this a violation of the house arrest? Gas station talk and Facebook friends seem to know more about the goings on in the haunted house on Georgia street then the authorities. Does this haunted victorian house hold more twisted secrets? Here’s hoping it’s not a friendly ghost visiting Steve.

Nodine now has a website called Friends of Steve Nodine Legal Defense Fund soliciting funds for his attorney. Funny thing is there’s lots of pic’s of Steve but few photo’s of any friends (and shrinking). Sen. Richard Shelby and Jo Bonner have disappeared from the site. It was also reported the alleged friend who put up the site was very irate when it leaked out who he was. Seems the only friends who’ll make a personal appearance on Steve’s behalf are of questionable character. Imagine that?!

With no court date set the accused killer now has time now to sun on the deck, texting, emailing (so called) friends, play video games, build the tower of twinkie (from stalkers handbook) and look for virtual love on-line. Warning - he’s bored as hell ... don’t send him your pics!.

Can a leopard change his spots? I don’t think so. “There’s something seriously messed up here.” No more flashing a badge and pretending to be an officer but it won’t be long and he’ll be back in the spotlight. He just can’t help himself.

Support Justice for Angel Downs on Facebook - Unwavering commitment to convicting her killer.

I wish the media would cover this story more. Why is there not more transparency to the working of the justice system? I have a few questions about the Alabama House Arrest and Electronic Monitoring Programs.