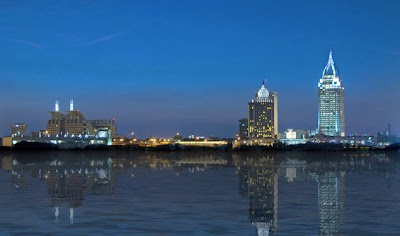 Mobile Alabama is my home and one I’ve cherished. The children here are taught to answer, “yes ma’am or yes sir” and southern hospitality is practiced along with football, going to church, fishing’ and hunting’.
Recently two men allegedly hunted down and killed their intimate partners. Both stories are as black and evil as any story you will hear on the national news. But they contrast in the fact that one man is behind bars and the other is free.
Why the preferential treatment? Could it be because he’s an elected official, with friends in high places?

Angel Downs Murder Investigation - Commissioner Steve Nodine - Only Suspect
The night of May 9th was the night Realtor Angel Downs was found shot in the head in her front yard in Gulf Shores, AL. Steve Nodine was seen leaving the scene, in his county provided pickup truck, by neighbors who heard shots fired. Angel Downs was Steve Nodines’s mistress and she was trying to end their longtime rocky relationship. There are many inconsistencies in his story as well as very suspicious behavior. Angel Downs family insists she was not suicidal in case that becomes a defense ploy. The DA says Mr. Nodine is the “one and only suspect.”
Mobile County Commissioner Stephen Nodine seems to have had a checkered and colorful past. He’s known as a pot smoking, pill popping, receiver of questionable funds, womanizer with a history of domestic violence and now the lone suspect in a murder..
Nodine is accused of multiple misuses of funds and misuse of a county vehicle. The Grand Jury impeached and arrested him, though he’s currently out on bail. His wife filed for divorce the day after he was arrested. Has he been getting special treatment? Many say he has and has to STOP!!
How did he get away with loosing a county truck, escaped domestic violence charges, a D.U.I. related wreck in New Orleans and purchased 2400 pain pills without any of it reported in the press. Seems many knew about his escapades but did nothing to stop him.
Now Angel Downs is dead. I hope those who looked the other way find their conscience and come forward with any and all information they possess. The irony is this man actually ran on family values?

Nodine, a surprise visitor at a recent prayer group asked for a prayer which was led by current DA John Tyson Jr, The episode stunned the group, the pastor said. "We were in disbelief at what had just happened,". Nodine says "God will God will show the way and have mercy on everyone.”
Murder and politic’s shouldn’t mix but there’s a DA race going on right now with Nodine’s Atty Mark Erwin running against Ashly Rich. Rich says about her opponent "His real job for the past 5 years has been working as a lawyer for Steve Nodine at the Mobile County Commission where last year alone he was paid over $250,000." Erwin went to Nodine’s house the day after Angel Downs was murdered to remove 2 guns ostensibly out of concern for his family and Nodine.
Evidence includes blood, bullets and maybe even surveillance video. I’m not the only one in Mobile asking, “Why hasn’t he been arrested for murder?” I’m praying for justice for Angel Downs!
Read Articles and documents in on going case LINK

Just 2 days later on May 11th, Tuesday night about 7pm my granddaughter ran to tell me to turn on the TV and the house alarm. Her eyes were wide and scared, “a man just shot his wife in front of 4 kids and he’s on the loose.”
Mother shot to death in front of children 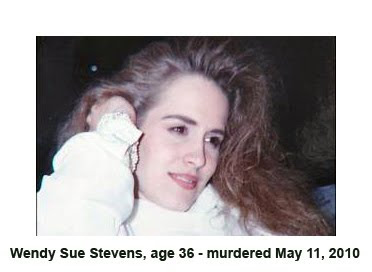 Wendy Sue Stevens was hunted and shot multiple times by her estranged husband Michael Berry while she sat at an ATM at 6:45pm on May 11, 2010. In the car were her 4 children ages 3 to 13. There were witnesses who said they couldn’t believe what they had seen. The husband then fled and alluded police for several days. When Police caught him a few hundred yards from the scene of the crime, they immediately arrested him and charged him with murder. He was seen that night on TV smart mouthing the cameras. He showed no remorse and pled not guilty to capital murder.
Wendy did everything an abused woman is supposed to do. Michael Berry was arrested twice for violating the protection from abuse order. District Attorney John Tyson Jr said Wendy’s mother had also been threatened by Berry.
Wendy’s only escape was through death. Apparently her life was torture for more than 10 years. The DA's office states they intend to pursue the death penalty.
Ginger, her 11 yr old daughter told LOCAL 15 News that her mother is in a better place. "I'm trying to be happy and know that she's not in pain anymore." Obit. 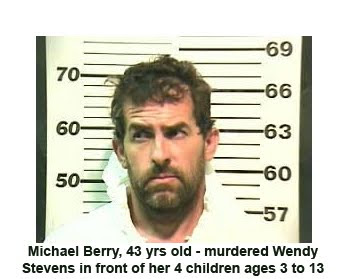 In both these cases the women were victims only because they were women and vulnerable to abusive partners. It appears that Mr. Berry’s case is being pursued with all diligence we certainly hope that Angel Downs murderer receives the same level of justice.