So Who REALLY goes missing?

Alzheimer's:  This disease touches many lives. Those with cognitive disorders are at risk of becoming a missing person due to confusion and becoming lost or wandering. Many of those who have gone missing have families that depend on us to help locate their missing loved one.

With the increasing amount of loved ones diagnosed with autism each year, an increase also occurs with those who suffer with autism who go missing.  We've noticed that many of those who have autism, and go missing, are usually children or teens.  Depending on the level of their cognitive awareness determines the probability of where we may need to focus in locating them. Those who are higher functioning may be "wandering" the streets and find themselves in situations in which they are at risk of becoming harmed and/or taken advantage by others. Some are manipulated and persuaded to leave the comforts of their homes with false promises of "love" in which they are invariably "preyed upon" and are at high risks of danger.

Those who are at a lower level of cognitive awareness may wander from their family and are highly drawn towards water. Studies are ongoing as to why and unfortunately many that become missing for more than 48 hours are commonly located passed away in a death by water. (Lakes, streams, ponds, pools, etc.)

Special and Medical Needs
From Diabetes, epilepsy to traumatic brain injury, (Stroke or brain damage) those who have possess any of these condition "types" are also at risk of becoming a missing person due to a medical incident/accident to confusion from cognitive awareness.

Emotional Disorders
Commonly known previously as "mental illness."  A large number of families of missing come to us whose loved ones have battled emotional disorders and have disappeared.  Families are already very exhausted, stressed and many have spent years helping their loved family members by advocating for them and assisting them through their low emotional states. Emotional disorders is a very difficult "find" for a missing loved one because many have the intelligence capabilities that can keep them missing for a very long time.

While they may not be plagued with a lower intelligence level, they are in fact at-risk due to their emotional disorders, which in many cases can have disastrous outcomes including self-harm and suicide.  Those who are at higher risk of becoming a missing person are loved ones who have chosen to go off their medication(s).

Some of the most common diagnosed loved ones who go missing are those who suffer with depression, Bi-polar disorder or Schizophrenia. Many times they are young adolescents who are in the process of receiving a diagnosis but disappear prior to it being confirmed. (This is very common in those between the ages of 18-24 and are college students.) 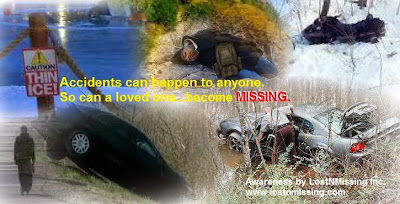 Accidents
Missing loved ones become missing due to numerous "accidental situations" such as off road vehicle accidents, those lost in mountains while hiking or even "freak" accidents and can become a missing statistic due to not being able to locate or find them timely. A large majority located deceased are also known to have gone missing from a public gathering in which alcohol was served.

One does not have to be intoxicated or legally drunk to suffer an accident which can be fatal. Far too often we assist families of young college age students (primarily young men) who leave a public gathering, pub or nightclub (under the influence and not legally intoxicated) only to be located deceased with a death by water. (Same common to those with cognitive disorders, above.)

LostNMissing established the campaign, and website, "Friends Don't Leave Friends Alone" [2] as the same young deaths we believe could have been avoided had the person left with someone else and did not stray off alone from their friends. 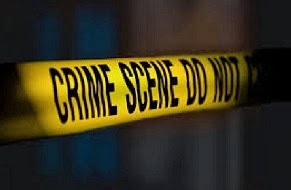 Divorce/Separation/Break-Up
It is very unfortunate but it is known that many women, and men, who go missing and are in the process of a separation from their spouses, or boyfriend/girlfriends, may disappear and a very high rate is due to foul play and by the hands of those they were leaving. This is a very complicated missing person case as families are enduring not only the pain of their loved one missing but also in states of confusion as to why law enforcement processes seem so complicated.

Families find there are many barriers, due to the legal system and laws, that stand in the way of finding their missing and loved family member. In nearly all cases the family already is aware that their missing will not be located safely and this adds to the stress and trauma.  Detectives and investigators must adhere to the law of "just cause" in order to find needed answers.  This frustrates law enforcement, as well.  While many may want to do full "homicide investigative procedures", if there is not "just cause" to enable them...their "hands are tied." (Example: Luminol spraying a home, arresting a potential suspect and "making them talk" are just two examples of many tactics families expect, but is halted due to laws that protect those who are suspect.)  Because a case may turn to a homicide investigation, or may be classified as missing with foul play, organizations are limited in what information is presented to them (and sometimes to the family, as well) to enable finding the missing loved one.

We also know, and have experienced, many cases in which all indicators show the missing may have been a victim of foul play (with homicide investigating) and the missing person is invariably located safely. Unless solid evidence (such as an obvious crime scene) exists, we always go with the hopes that the missing can be found alive and well. 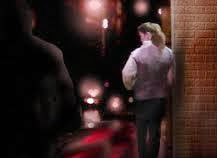 Human Trafficking
Missing loved ones can become victims of human trafficking and quite a majority that are trafficked is for sex purposes. According to the FBI website, they explain, "It's sad but true: here in this country, people are being bought, sold, and smuggled like modern-day slaves.They are trapped in lives of misery-often beaten, starved, and forced to work as prostitutes or to take grueling jobs as migrant, domestic, restaurant, or factory workers with little or no pay.

We're working hard to stop human trafficking-not only because of the personal and psychological toll it takes on society, but also because it facilitates the illegal movement of immigrants across borders and provides a ready source of income for organized crime groups and even terrorists."  [2] While primarily those missing are young women, young men are known to have been trafficked as well.

Drugs of Abuse
When a loved one is under the influence of drugs and/or associates with those who buy, sell or take drugs...this puts them at risk of danger in which they can possibly become a missing person. We've had cases in which those have been located safely and living a life "off the streets" in a drug dazed world and we've had missing loved ones who were located deceased a victim of drug activities, suicide under the influence (or through withdrawal) or due to an overdose.

Of One's Own Choice with cognitive awareness and decision making

Surprisingly, this is one of the lowest common causes of an adult person's disappearance. Highest among minors. Yet, adults receive very little media and public awareness.

Unfortunately the "general public" has the misconception that this is the "number one reason" someone is missing, especially as it pertains to adult males.

We certainly do need to have this category, and fact is...we wish this was the reason most loved ones go missing as the alternative reasons are not usually with a good ending.  85% of our missing adult cases end each year with the missing adult either located deceased or known to be deceased and no body recovered.

Those  missing, of their own free will, are due to their own choice to leave their present life. Again, a very low percentage of adults, high for teens. (ex: runaways.)  These decisions are made with cognitive awareness, are usually planned and usually are the easiest cases to locate the missing person as they leave more "trails" for investigations to track their whereabouts.  Some of the more common reasons are: To start over a new life, to escape and hide from law enforcement, to experience life outside the rules of a parent/guardian (commonly known as "runaway"), to escape an abusive person by going into hiding or to "live off the land" away from everyone, to start a new life with another person, or due to joining a cult. 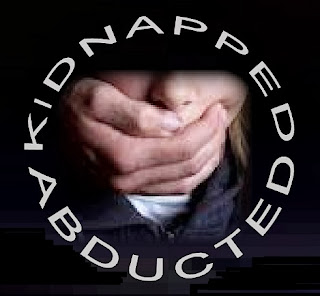 Abduction/Kidnapping While rare, abduction is a possible cause for a missing loved one (both adults and children) to have disappeared. Parental abduction is the leading cause of missing children in this particular category along with abduction for trafficking purposes.  Lower on the rate of statistics is the kidnapping for the purposes of rape and/or murder. It is also extremely rare that one is kidnapped for the purpose to extort money in exchange for their safe return. According to the National Center for Missing and Exploited Children, the major causes for missing children are: 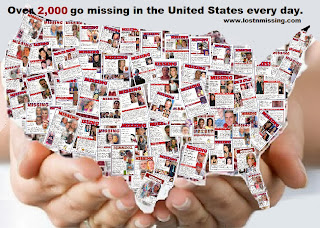 Over 2,000 go missing in the United States EVERY day in the USA.
No person, no family is exempt from the trauma of having a loved one disappear. Every person, and every family, from all walks of life can have this happen at any time....and feel lost, confused, worried, fearful and will turn to us for help. We are here for those families and hope this public awareness campaign provides more clarity as to the plight families of missing have and the need for the public to assist whenever someone goes missing in their community.


LostNMissing Inc., is an all-volunteer national tax-exempt organization under section 501(c)(3) of the Internal Revenue Code (the "code") and qualifies as a public supported organization under Sections, or Categories: P99 (Human Services - Multipurpose and Other N.E.C.); M99 (Other Public Safety, Disaster Preparedness, and Relief N.E.C.); I01 (Alliance/Advocacy Organizations). LostNMissing is organized and incorporated under the laws of the State of New Hampshire. We never charge a fee for our services.
at 8:57 AM