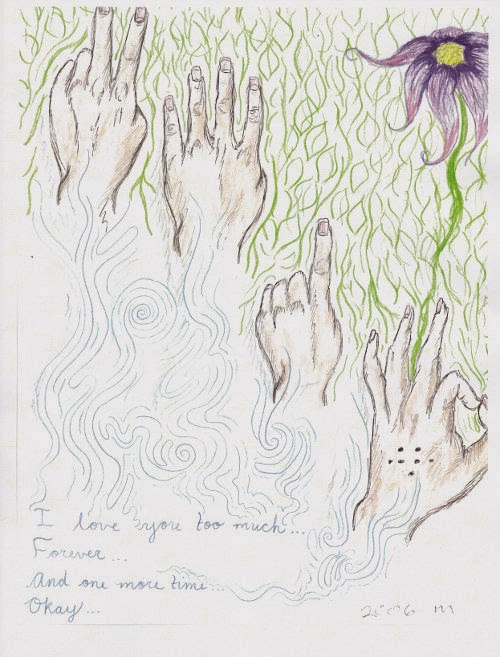 
For anyone who has followed the case of Morgan Harrington, the meaning of the numbers 2-4-1 are clear. To those who wonder what it means and why do they see those numbers surrounding postings about Morgan, there is an explanation. As you see at the top banner of the family website, Find Morgan, it lovingly says, "I love you too much, forever, and once more," hence 2~4~1. Morgan created the "code" as seen in the drawing above done by her in 2006, and it's carried her family and those friends surrounding them for the last two years.

Morgan was a vibrant 20 year old student at Virginia Tech, a whole life ahead of her. On October 17, 2009 she was stolen away, away from her family and away from all that she may have been.

On October 17, 2009 the Harrington's family life, Gil, Dan and Alex, was forever changed when their beautiful daughter and sister, Morgan, came up missing from a Metallica concert she attended in Charlottesville, VA. The country took notice, assistance poured in from all over, but her lifeless remains were not found until January, 26, 2010 in a remote field in Albemarle County, VA on Anchorage Farm. Morgan was taken from this world just as she was becoming a woman recognizing her potential.

For some, it might be the end of the story, a resolution, but until those who took Morgan Harrington’s bright light from this world are brought to justice, the Harrington family will continue to seek that the scales of justice to be balanced. In the meantime, they carry on in Morgan’s name, carving her legacy into a world which will never know all that she had to offer.

Gil Harrington is an amazing woman, nurse, mother and wife, who makes time to devote to Morgan’s legacy in many ways. Recently, Gil has reached out to other young college co-eds, feeling invincible and “Teflon coated,” warning them of the dangers that exist on college campuses across the country, and the fact that there is still a killer(s) on the loose in the area of the University of Virginia Campus.

The Harringtons have become active in the passage of “Kathryn’s Law,” which would require campus police departments to hand over such serious criminal investigations to local law enforcement agencies. ”The response to murder and rape,” she says, “should be the same across the nation.” As laws stand now, campus police hold jurisdiction over crimes committed on campus, many under reported, and under charged, and some being swept under the rug, as in the cases of Kathryn Russell, Liz Seccuro and Pat Collins, all victims of campus crimes.

To keep Morgan’s memory alive, the Harrington family has created ways to shine her light into the following important projects:

“Morgan’s plan to teach at the elementary level will be recognized by the construction of the MDH Educational Wing in Zamia. Morgan will not be able to go to Africa, but she will be still be part of changing the lives of many impoverished children who will be educated in this facility. Morgan planned on traveling to Africa with OMNI after graduation.”Construction of the Morgan Dana Harrington Educational Wing, OMNI Village, Ndola , Zambia, Africa. Donations to OMNI, Orphan Medical Network International, may be mailed to:
OMNI
6930 Empire Lane
Roanoke, Virginia 24018

Or on line at www.omnimissions.com  OMNI is a 501(c)3 charitable organization“To honor Morgan’s intention to become a teacher we are sponsoring these educational projects that Morgan was directly involved with prior to her death. Donations are gratefully accepted for:

Or on line at Morgan Dana Harrington Scholarship.

To keep up with updates about Morgan's case, and her ongoing legacy, please refer to the family website: Find Morgan.com