A Bridge to Understanding “Holding my Hand through Hell” – The Book 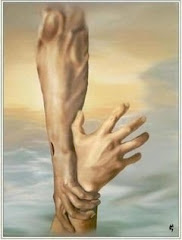 By Donna R. Gore, M.A.
"On the street I saw a small girl cold and shivering in a thin dress, with little hope of a decent meal. I became angry and said to God, Why did you permit this? Why don't you do something about it? For a while God said nothing.That night He replied quite suddenly, I certainly did do something about it, I made you. - Unknown-

I don’t expect you to understand domestic violence, or more descriptively, intimate partner violence on my say so alone…. for I am not an expert. Nor should you be able to understand it from the point of view of your local non-profit director, your shelter program coordinator, a TV show or your neighbor next door who is “occasionally beaten.” Susan Murphy Milano and I have a lot in common…and we have other life experiences that are dissimilar. I know parental homicide up close and personal, like she. I also know about stolen childhood, losses…and gains of the medical variety – 55 times to be exact! I know about loss and I know about grief…and I know about insecurity and confidence in spite of….

I consider myself incredibly lucky to have survived it all… “in one piece” as they say… I also consider myself incredibly lucky to have been among the few who had a personal preview of her upcoming book, “Holding My Hand through Hell.” One long July 4th weekend last summer, I took that journey. I was naïve enough to think I had learned enough intellectually and I would “just be adding details to that knowledge.” How wrong I was! It was like passing over to the other side known as hell, constantly engulfed in an inferno of fear, unpredictability, pain and cruelty.

It was an account told in the first person beginning from childhood to the end of the journey with a woman who “thought she knew better from previous experience,” having grown up in a house of horrors and then choosing partners who apparently repeated that pattern.

However, this book is so much more than “some woman’s story.” I was transformed and touched to my very soul with each and every page. It was personal… It was visceral. It was honest. It was told through the eyes of a child making deals with God to stay alive long enough to plan her escape with her mother… or so she hoped…. For a child to bear such a constant burden is totally unfathomable to me!

The tragedy of a revered “monster/father” who was sworn to uphold the law and who could do no wrong in the eyes of the public was the biggest most disgraceful injustice ever! He used that badge as a license to abuse his family beyond all comprehension.

It was an era in which such activities were “private matters” behind closed doors, with few community resources except for the occasional priest or school official. In the act of disbelieving an innocent child reached out with poetry as a cry for help , and was beaten down to submission and called a liar. It truly broke my heart!

To this reader, that part of the book said this was a sign of more grave things to come. The pages continued to reveal a journey so treacherous filled with “survival of the fittest “ episodes… thinking on your feet…always being at least one step ahead of the monster. Rejection, punishment, masquerading for the public.. a mother caught in the middle between love for her children and a continuous dance with impending death.

My heart sank and then it broke a million times over… I cried again and again… The innocent child grew into a young woman, only to be threatened and violated by the monster…and men to come after, whom she thought she chose with her eyes open…but not really.

How could she have known? The trees in the forest were so thick with dysfunction, no one could have foreseen when survival is your only goal. Life as an adult was a quest to help others in similar circumstances… many more trials and tribulations and incredible loss, such loss! ‘Just when you think another tragedy could not possibly befall one person ,it happened again and again! Even at her father’s funeral there was the ultimate irony… as if the devil was laughing at Susan! But she survived as she always had!

I will not reveal if there is the “mandatory happy ending,” for happy endings may only be reserved for Walt Disney movies…and not real life. What I can say, is that Susan made another escape plan, and she walked on the beach gathering strength and probably feeling her mother’s presence.

Be brave, hold your head high and never say die… (even though you feel like dying more than you’d admit). Anyone who has survived what Susan has ,cannot be judged too harshly for her past deeds. Although she could not “Slay the dragon” and bring her mother to safety as she wanted, she did something few people have ever done….. She fought against insurmountable odds, climbed her personal Mount Everest and continues to help others to beat the odds against their real life monsters.

We respect and love you for the person you have become, Susan! ‘Such a long, long journey since that innocent child fought back against all odds! For more information on future purchases, go to www.susanmurphymilano.com. 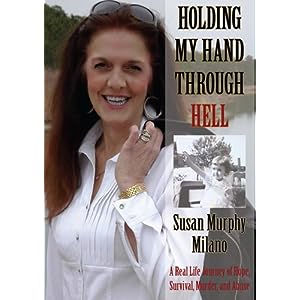 "Holding My Hand Through Hell" will be released Fall of 2012, published by Ice Cube Press. To Pre-Order the book click here on Amazon.