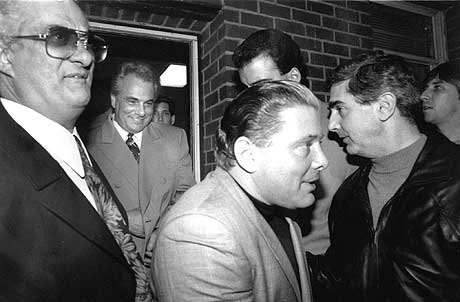 Salvatore “Sammy the Bull” Gravano was a criminal for most of his life. He was a tough guy who used violence and intimidation to impose his will on others. In 1976, he became a member of the Gambino crime family, eventually becoming underboss to John Gotti. In the world of organized crime, Gravano was a very dangerous and powerful man. Although law enforcement and his colleagues and associates knew about him, he was able to ply his trade for many years and remain virtually unknown to the general public.

All that changed in 1991 when Gravano burst on the national scene by doing the unthinkable. He flipped and became a government witness against Gotti. Prior to that, federal prosecutors had suffered a series of courtroom losses at the hands of Gotti’s attorneys, earning the flamboyant boss the nickname “Teflon Don.” But in 1992, Gravano’s testimony was instrumental in Gotti’s racketeering conviction, which resulted in a sentence of life in prison without the possibility of parole. Thanks in large part to Sammy Gravano, Gotti’s Teflon had turned to Velcro.

As part of his deal with the government Gravano admitted to myriad criminal activities, including taking part in 19 murders. However, his value to prosecutors as a witness against Gotti was such that he received a token sentence of five years in prison and admittance into the federal Witness Protection Program.

Gravano’s defection was viewed in different ways by the public. To those to whom Gotti had become a kind of cult hero over the years, Gravano was the ultimate rat; a traitorous cur to be held in total contempt. Others thought he was as bad as Gotti and that the government had erred in giving the admitted killer the deal of the century. And some considered him a hero for having the guts to help rid society of the likes of John Gotti.

Gravano’s organized crime associates also had mixed opinions. Some disliked Gotti because he disregarded Mafia protocol when he orchestrated the 1985 murder of then Gambino boss Paul Castellano, without getting permission from the Commission. Others became disenchanted with Gotti and his apparent infatuation with the media. The Mafia was, after all, a secret society. Being in the public eye was not good for secrecy or for business. They shed no tears upon Gotti’s departure.

However, most felt that overall, the Gravano situation was an embarrassment to organized crime in general and to the Gambinos in particular. In addition to that prevalent feeling on the part of the rank and file, there were other Gottis still in positions of power within the family. Gotti’s son, John Gotti Jr., his brother Peter, and other relatives undoubtedly harbored ill will toward Gravano. It seemed a no-brainer that at some point there would be an attempt at retribution. The question was when it would happen.

Gravano received an early release from prison and went back into the community as a member of the Witness Protection Program, making him a difficult target for his adversaries. But in 1995, he voluntarily left the Program. During a TV interview following his release Gravano made this bold announcement:

"They send a hit team down, I'll kill them. They better not miss, because even if they get me, there will still be a lot of body bags going back to New York. I'm not afraid. I don't have it in me. I'm too detached maybe. If it happens, fuck it. A bullet in the head is pretty quick. You go like that! It's better than cancer. I'm not meeting you in on some fuckin' farm. I'm not sitting here like some jerk-off with a phony beard. I'll tell you something else: I'm a fuckin' pro. If someone comes to my house, I got a few little surprises for them. Even if they win, there might be surprises."

Gravano’s bravado aside, now that he was on the loose and out from under the government’s veil of protection, if his enemies could locate him he’d be vulnerable. For Sammy Gravano, the clock was ticking.

In 1999, the Gambinos were ready to make their move. Peter Gotti had a coded conversation with his incarcerated brother John at the federal prison in . That discussion concerned an article in a , newspaper that stated Gravano was living in the area and was running a construction company. It was known that Gravano’s wife Debbie, who claimed she had left him, and children were in the area. But was Sammy really there too?

Huck Carbonaro was never much of an earner for the family. He’d taken over Gravano's loansharking book, estimated to be worth more than $2 million, after Gravano flipped. But after a while most of the customers refused to pay back a "rat's money" and the cash flow dried up.

However, according to federal prosecutors, what Carbonaro was good at was killing. In addition, he’d been part of Gravano’s crew and knew the man and his habits well. And as a bonus, his wife continued to have telephone contact with Gravano’s wife, providing the potential to gather valuable intelligence. For those reasons Carbonaro was a logical choice for such an important assignment.

In what would later prove to be an ironic twist, the feds alleged that while travelling cross-country, Carbonaro confided to Mangiavillano that of the many people he’d killed, the only murder he regretted was that of his good friend Nicholas “Nicky Cowboy” Mormando, who was slain on Gravano's orders for violating the family’s policy of not dealing drugs. But later on, Gravano changed his position on the issue of distributing drugs and became a drug trafficker himself.

Fat Sal’s reputation was the opposite of Carbonaro’s. He wasn’t known as a killer. His reputation in the criminal underworld was as a highly skilled thief, who led a crew of Mob associates that specialized in bank burglaries, bank robberies, and auto theft. He was a master of electronic gadgetry and a valuable earner for the family.

Sal was also known for his resourcefulness. He’d committed more than 30 bank burglaries from Brooklyn to , usually by angling a homemade gaff and three-pronged spears into night deposit boxes to pluck out the loot. During one , heist he rigged a remote controlled drill to cut through concrete and steel. His organized crime pals dubbed his capers "Fat Sallie Productions."

After an 18-month prison stretch in the mid-1990s for bank burglary, during which his weight dropped to a svelte 225 pounds, Sal was deported to , where his parents were living when he was born. From he traveled to his parents’ birthplace in . After that he went on to visit friends in , , and then to . However, he longed to get back into the , and slipped into the country by riding a Jet Ski across the .

Once again in in late 1999, the 35-year-old Mangiavillano reunited with his wife and three young children. He also put the word out to his criminal associates that he was back and available for work. It was important for guys like Sal to let their presence be known quickly. If they didn’t, upon discovery their friends might think they’d kept silent because they were cooperating with the law or had become weak, making them untrustworthy or unreliable. Such impressions could affect their ability to earn, and even be hazardous to their health.

Huck Carbonaro was among those who heard of Sal’s return. Carbonaro had gone on scores with Sal in the past. His nephew, Tommy Dono, was a member of Sal’s bank burglary crew. And several years earlier when Sal heard that a family associate from another crew was making Carbonaro’s excessive weight the butt of his jokes, Sal and three of his friends went to the bar where the offender hung out. The joint was full of the guy’s friends. Sal and one of his buddies dragged the man outside and beat him mercilessly. One of Sal’s other two friends stationed himself at the bar’s door to block the victim’s pals from intervening. The other sat in their car with gun in hand, prepared to shoot if the bar patrons got out the door and tried to interfere with Sal’s administration of justice. Later, when Carbonaro asked Sal the motive for the beating, he said it was because the victim had been making fun of Carbonaro. Sal’s action placed him in high esteem in Carbonaro’s eyes.

Shortly after Sal announced his return, Carbonaro received his marching orders regarding Gravano. Although Sal had never committed murder for the family before, Carbonaro knew he was willing to commit violence. And he liked the way Sal handled himself, his abilities with electronics and gadgets, and his talent for overcoming obstacles. Equally important, he trusted him.

Confident that Sal had what it took to be a valuable partner in the assassination plot, he invited him along. He then explained the potential rewards. If they were successful, Carbonaro would be promoted to captain. Fat Sal would have made his bones and become a made man—a full member of the Gambino family.

To many up and coming mobsters, getting made was a giant step up the career ladder. But not to Sal. Over the years he’d done quite well for himself as an associate. To him, being a made man would subject him to much tighter control by the family. He’d have to live by another standard of Mafia rules. That would change his lifestyle in a way he wasn’t excited about. But Sal felt that once asked, he couldn’t say no. In the Mob, refusing Carbonaro’s request for help might have cost him his own life.

So in late December, the pair headed for .  Their assignment: Locate and assassinate Sammy Gravano, the super-rat.

Next: The Mission – Part I

Dennis Griffin is the author of several mob related books, as well as a co-host on the popular radio show, Crime Wire.
at 8:45 AM