10 Reasons to Run From a Serial Texter! 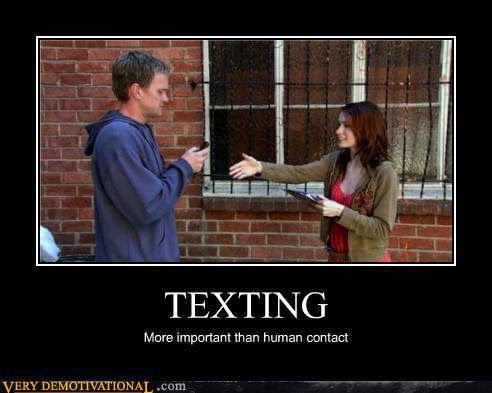 by Heidi Hiatt
Young ladies (including those in my life), listen up. It’s time for some straight talk about guys who consider texting a primary form of communication or an appropriate way to get to know you.

As evidenced in previous blog posts on grammar and communication skills, I feel that texting is the devolution of the English language. Yes, I text; it can be a quick way to check in with a loved one or tell a friend about something funny when they can’t talk on the phone. But I decided a while back that I am done trying to have lengthy conversations by text because they are a convenient excuse not to actually TALK to someone.

Guys often like to communicate in short bullet points, so texting can be a comfortable way to achieve a quick back and forth on terms more amenable to them. Not all men are like this, but men who work in professions in which they are accustomed to flinging brief sound bites over the Nextel or radio might be. Tough beans, those guys. It ain’t all about you and sometimes you need to accommodate women’s style of communication as well.

Here are some points to remember when a guy says, “let’s text!”

1. Guys who text do not call. Even though they’re sitting there gleefully poking buttons on the same phone they could just as easily call you on, they’d rather stick to shallow sound bites rather than engage in meaningful conversation. (Who among us has ever had a deep conversation about Aristotelianism and astrophysics by text?)

2. Guys who text do not spend time with you. If you’re texting with a guy who will spend hours ping-ponging cute little symbols and chat acronyms between your cellular communication devices, you’re McDonald’s to him. You’re a convenience that will give him attention on his terms and he doesn’t have to show you proper respect or actually take you on a date.

3. Guys who text only are emotionally unavailable. Ever read Sandra L. Brown’s How to Spot a Dangerous Man Before You Get Involved(http://www.amazon.com/How-Spot-Dangerous-Before-Involved/dp/0897934474)? Does this guy sound familiar? “He is married, separated or dating someone else but usually will tell you he is ‘almost out’ of the relationship but ironically, never does really get out. He is interested in hyper tolerant women who will wait and wait on his eventual ‘availability’ for their relationship. Also likes to target women with poor boundaries.”

If a guy’s chronically texting with you, you can bet you’re not the only one he’s texting with. I know of cases in which “text guys” had whole harems out there to bolster their egos and provide them with playtime. Yeah, supposedly committed and married guys. It’s cheap and easy fun for them. They don’t care if you’re one of ten. They’d rather have ten than one.

4. Guys who text avoid emotional intimacy. Actual conversation could lead to authentic sharing which, gulp, could involve real emotions. When you’re just looking for cyber companionship, a poor substitute for the real thing, you don’t want to feel emotional except for the high you get by someone flirting with you at your whim.

5. Guys who text will sext. When you’re giving freely of yourself and your time to someone who is not pursuing your attentions in an honorable way, they will push your boundaries and expect your text messages to become increasingly exciting.

Texting is one of their drugs, a way to get attention and flirting for almost nothing. Their desire for their drug often grows into requests or demands for nude pictures of yourself.

Don’t assume that those photos will be a little guilty pleasure he keeps to himself. There are all kinds of psychos out there who can use those to blackmail others, destroy reputations, and do all sorts of damage with. Who knows who else those have been shared with.

6. Guys who text want sex. Chronic texters who never (or rarely) call, hang out, or take you on a date want to see what else they can get for free besides your affection and time. Why not sex? Sociopaths in particular love it when they can get something for nothing, and if they can tease a woman into submission by text and take advantage of that, why wouldn’t they? Virtual foreplay, then arranging a booty call, is cheaper than a hooker and something they can do while bored in their 2 P.M. accounting meeting.

7. Guys who judge you by text aren’t worth it. If someone thinks that you are unworthy of actually spending time with according to short, emotionally constrained blips on a screen, he’s not worth giving a chance to. With a huge nod to the bestselling book He’s Just Not That Into You, if a guy is truly interested in you he will make time to get to know you. He will treat you like a lady. He will earn your trust and respect if he deserves it at all, not demand it on his terms.

8. Guys who text need to grow up. There, I said it. Someone who only wants to text you is like a little boy passing notes in fourth grade except that it’s not fourth grade anymore and he wants more than a playground smooch. Chronic texting is a sign of emotional immaturity and a man with a low emotional IQ is a dangerous one indeed. They throw the same wild tantrums that toddlers do except they’re a lot bigger and can hurt or kill you and your loved ones.

9. Guys who text don’t have to show you who they really are. I had an argument with a young person the other day about how their online interactions were not well regulated. I told them that you don’t really know who you’re talking to online and the most successful predators masquerade as people they’re not.

The same is true of texting. Dark souls can be cutesy and seem sexy and be “vulnerable” in virtual reality when real life might be something entirely different. Do a background check on people like this. You’ll be surprised at what you can find. Besides known players, you might also find criminals.

10. Guys who text will use you and move onto the next one. If a guy can’t graduate to phone calls and making time for you in person, he doesn’t want that. You’re not special to him. You’re not much different than the bag of Fritos he picks up at the 7-Eleven on his way to the ball game. It’s only a matter of time before he’s tired of you and moves onto his next batch of cyber girlfriends. He has others already, remember?

Ultimately, ladies, don’t forget that you are a daughter of the King. God is your Father and he wants the very best for you, not guys who will play with your emotions and make you think more is coming when it’s not. You deserve a man who will take the time to get to know you in loving and caring ways, not Textmaster Flash with all of his sycophantic soothsayings.

If all he wants to do is text, trust me– run away.

I’ve been texting for a year with a couple of guys without ever going on a date with them. -Chloe Sevigny