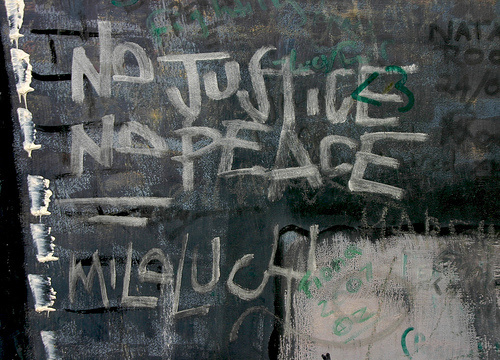 What is justice? When we are faced with the murder of our loved one, we are overcome with a plethora of emotions and we begin a search for justice. We as survivors spend so much time seeking that justice that our own grief is often put on a back burner to be dealt with later because the desire for justice for our loved one is stronger than our personal heartache. They were robbed of so much more than we were and our love for them drives that need for justice.

When we think of justice for the crime of murder we generally envision the defendant going to trial, being found guilty, then serving life in prison or execution. We see the evidence in the court procedures and know our loved ones life was cut entirely too short at the hands of the defendant. We want to see them go away for a very long time or be executed and then justice is served.

Is justice an eye for an eye? Is justice found in the prison sentence? Is justice found at the end of the executioner’s needle? What happens if this sequence of events doesn’t happen like that and justice is denied? Worse yet, what if the defendant is never caught or is freed on a technicality? What if they are found to be un-restorable in their mental capacity and are set free? What if a plea is offered and they see much less time than had they been convicted? How does our murdered loved one get justice?

I struggled for years over this last question. How do I get justice for my sister Veronica and her disappearance and probable murder? We have no body, no murder weapon, or no verification of death. The only thing we have is a police report where a person very close to her stated they could have very well killed her but couldn’t quite recall due to a prior brain injury that caused memory loss at times. He went on to tell the police that if he did kill her then he was much smarter than them and her body wasn’t going to be found. For over 22 years, he has been correct, thus far.

My heart breaks when I am working with a family and they do not feel the sentence or outcome was justice. I often have to remind them that we have a court of law and not a court of justice. The laws can, at times, seem unjust for the survivors of homicide because the defendants appear to have all of the rights afforded to them. It is never easy to hear that the person who killed your loved one got off light or never even face a criminal trial because the case is unresolved.

How do we give our loved on justice in these cases? I have struggled with this question for over 22 years now and I get more pieces to the puzzle as the years progress. When I was fresh with grief, anger, hatred, and rage in 1990, I saw justice as taking him out to a field and killing him in the most brutal of fashions. As the years progressed and I saw that the likelihood of the case being resolved grew ever slimmer, I continued to seek resolution. I didn’t care that the investigator on her case appeared to be sitting on her case and not working it. We often went years without even a phone call to say he was thinking of us and he still wanted to find out what happened to Veronica. We go silent, another injustice.

As the 20 year anniversary of her disappearance approached I decided to make sure her memory wasn’t forgotten. I started a Facebook page for her because I was running into people there who would always ask me about her case. Instead of repeating myself constantly, I set up a place where her family and friends could remember her. I figured maybe a handful of friends would join; we had over 100 people in the first week. Currently, there are 1200 members on her page. They remember her, discuss the incompetence of the case management by police, they speculate on who killed her. They keep her memory and case alive.

The members soon began to discuss a memorial service for Veronica since a funeral was never held for her. The groundwork was being laid for a memorial service on the 20 year anniversary. I thought about this for a long time and felt something was missing from this event. I soon came up with the concept of the Veronica Blumhorst Memorial Expo for a Safer Commmunity which was going to be a safety fair of local service agencies to expose the community with the resources that are available to them in Northern Illinois River Valley. Even if it saved one person, there was some justice and Veronica saved a life.

I got a huge sense of relief after the expo and memorial. I felt that she did indeed get a modicum of justice, the scales weren’t even but they moved in her favor some. I returned to Arizona and began to look at the next step. What do I do next to get her more justice? The months went by and fate intervened. I lost two jobs within three months and was desperately seeking a job when I got a message from Gail Leland, the founder of Homicide Survivors. She told me to go there to see if they had anything for me. I went down and was told that they could employ me for two months. I jumped at the opportunity. I feel Veronica interceded from beyond because the permanent person they had hired didn’t work out and I was soon offered a full time position. I knew this was Veornica putting me in a place to work on that justice thing again. This time it was to help others on their journey of grief and by doing that then her death was not in vain and justice is added to her side of the scales.

After a year at Homicide Survivors, I was blessed to help many families during their tragedies. I still had my own tragedy to deal with and the fact that we never found her bothered me immensely. I sought out a human cadaver search team who agreed to assist our family. I went back to Illinois in September of 2012 on another justice mission. We were possibly successful in locating the area her remains are buried but now need to wait until this spring after the thaw and weather stabilizes out more. Hopefully we will bring her home soon for a proper burial. That would be justice to me today, just having her back.

Over time my concept of justice has changed. I started out with an eye for an eye idea of justice and it has evolved to an attitude of “give me back what was mine”. We just want to have that confirmation that she is dead and this state of limbo that has haunted us for 22+ years can be lifted. I would like survivors to know that even if you don’t get justice in court, you can still get justice for your loved one. I went to the extreme and you can too if you choose. You can also do the small things that bring them justice like start a neighborhood watch, volunteer at a womens shelter, or volunteer for something your loved one was passionate about. There are many small ways you can add justice to their side of the scale. Will they balance in the end? Probably not, but you can definitely make a difference and bring some good out of all the bad.