For the Love of a Disabled Child 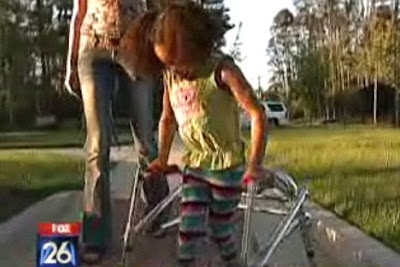 A wise and compassionate person – a mother and grandmother sent Ladyjustice information recently pertaining to news stories forwarded and LJ’s own disability –cerebral palsy. Her friend wanted to know what is the true story “behind the sensational headlines.” In our current world of 30 second news features, we frequently get bogged down and distracted by those issues that elicit the greatest emotional response versus what is truly occurring.

Having a permanent disability is a life altering experience… and it has the potential to shatter lives if the family unit is unprepared and cannot function as a team to advocate and assist their disabled child.

Ladyjustice can site chapter and verse about her two medical challenges that engulfed her entire childhood existence…. which continues on a small scale in her adult life now. A quick story… “Littlegirljustice” was asked to be CP poster child of Connecticut when she was around five year’s old…. BUT, she got “voted off” just like American Idol because… those deciding said that “she didn’t look bad enough!” (i.e. Did not have a sad expression on her face, did not look as though her body was atrophied etc.) Can you imagine??? Another time “Littlegirljustice” was due to have her photo taken with the Governor…but she chickened out…. Dissolved into hysterical tears, refusing and saying, “What’s a Governor?” Ha! [LJ- life is so ironic…. Ladyjustice has worked in a manner of speaking under three Governors in 12 years and has, in fact, met and been invited to a bill signing with former Governor, M. Jodi Rell]

At LJ’s ripe old age of “50 something”…. She has honed her compensatory skills such that “the disability that “won’t go away”-cerebral palsy remains “a mere nuisance at times – the mouse versus the elephant in the room. Such an attitude does not come easily when faced with the ultra superficiality of life in 2012. As consumers, subliminal messages invade our every waking moment to at least “look perfect” if we cannot “be perfect.” These messages are a particularly rude awakening for prepubescents, teens and the disabled.

1) “School bans cerebral palsy girl from using walker… because it is “unsafe” for other children.”
2) “Mom Plans to Sue School District.”

The tone of these articles are sensational – A mother from Kingswood ,Texas tape records a special education director’s comments for purposes of “entrapment” and uploading them to YouTube “as a last resort” for her style of justice. The mother is filing a lawsuit against the school.

The initial controversy appears to center around the fact that her daughter, Lakay, who has cerebral palsy, uses a walker [termed a “contraption” in a UK article] that may be of the collapsible or fold up type. Lakay evidently fell in the parking lot of her school when she was bearing weight on it for support when it “collapsed.” ***The school administrators contend that “other children are not safe” if Lakay continues to use her walker.” Really???

“Ms. Wheelchair Texas Foundation”, a Ms. Ann Calvo, born without limbs, quotes ADA laws concerning the least restrictive environment. She further commented that if she needs a walker, it should be provided. No argument… HOWEVER, you are missing the point... or a few points.

Ladyjustice is all for equal access, as she has suffered her share of discrimination as well regarding such matters over the years. However, it is crystal clear that 5 year old Lakay Roberts was the jewel of this story…and she barely got a mention, nor was she appropriately advocated for… Everyone is so quick with political correctness and legal gobbledygook… Where is the heart of the matter or the real issue that matters? Where does Lakay fit into the equation?

Although Ladyjustice is not an MD, she worked as a clinical professional in many types of settings for many years. In addition, she had experienced her very own trials and tribulations, growing up in hospitals with at least 17 orthopedic surgeries and many other surgeries od another kind. Ladyjustice has cerebral palsy of a different type.

You can call LJ politically incorrect for not sharing the “misplaced outrage.” She doesn’t care… All this aside, here’s her take, as told to her observant friend. 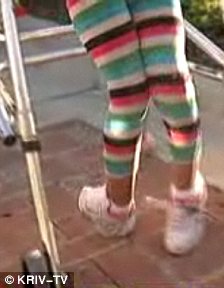 If you look at the photo, she appears to have a scissors gait pattern with:
Scissors gait -- legs flexed slightly at the hips and knees like crouching, with the knees and thighs hitting or crossing in a scissors-like movement.*** This would be very difficult to maintain walking even with the support of a non-collapsible walker.

Whereas I have a gait pattern characterized by:
Spastic gait -- a stiff, foot-dragging walk caused by a long muscle contraction on one side.

I also have a lot of trunk movement to propel me forward as a compensation. Otherwise, I probably couldn't walk at all due to the high degree of stiffness/spasticity.

I think it's political and purposefully ambiguous in that the school administration doesn't want to come out and say that the little girl is unsafe... so they say that others will be unsafe. It could be that they are waiting for a particular time in her growth pattern to perform corrective surgeries as they did with me. However, in the meantime, it seems obvious that this scissors pattern doesn't allow her to even attempt to clear her feet for walking even with support. I vote for a wheelchair until they can do corrective surgery or whatever the future plan is…

All of my orthopedic surgeries were carefully timed as I grew. They may have taken one ability away (in order to give me something more important). And.... they may be in some podunk town where the best orthopedic experts were not available. I know about the legal "least restrictive environment crap". But, wouldn't you want your child to be safe and not to struggle so until surgery is done?? She would certainly be more mobile in a wheelchair. Although I think she would need some custom seating with that posture. My bias is that all of the best orthopedic Children's Hospitals are located in the northeast.

As for firing the Administrator... I don't know. I think her safely with walking needs to be re-evaluated first and accommodated appropriately with the school complying ...or else!

Virtually no research is going on for those with adult CP…it’s all pediatric. Those of us who survived in the 1950’s were supposed to die in institutions…and many did with severe mental retardation (now called developmental disabilities) and other medical complications. They forgot about those of us who were little but strong, who survived, live on and thrive!

I sincerely hope these folks in Texas can get out of their own way… and do what’s appropriate and safe for Lakay at this moment in time…because things are always changing as you grow. Stop worrying about firing, suing and get this child the correct treatment. You can always change schools!