I drove by the morning after. There were two cars in the drive, but no people in sight. There were no signs of trouble, just two marks of orange spray paint. If you didn’t know otherwise, you might think the marks were from the utility company, marking where work was to happen. I was driving out of my neighborhood, down the same street and past the same houses I do every day, for another Saturday morning at the ball field with my kids. Others were walking their dogs, looking for garage sales, headed out for errands.

But in that home, just past the orange spray paint, nothing would ever be the same. The afternoon prior, Cynthia Hayes had come to her home to get belongings, at a time when she didn’t expect her husband home. They were separated, and must have had a history of violence, because a protective order against him had recently expired. It wouldn’t have helped her this day anyway. A lot of details are unclear as the investigation continues, but this much is clear- David Hayes was home. David Hayes had a shotgun. David Hayes used it.

As his wife and a friend ran from the home, he chased them. He first shot the friend, who fell where one of the orange marks of spray paint stains. His wife made it into a neighbor’s home. A neighbor encountered him and begged that he not shoot her, reminding him that she had a child. She later said that he was blank and she knew had snapped. He did not shoot her. But did go into the neighbor’s home where his wife was, shooting and killing her. He then returned home and shot himself, dying hours later.

That night, our neighborhood was closed off, with media swarming and crime scene units working. People gathered on the street. Friends and family who saw our street on the news called to check on us, and many we knew were posting on Facebook about the horror. But the next morning, as I drove by and saw just orange paint, I was the most disturbed. Not that such violence can happen. But that we hide so much and see so little, and go back to normal so quickly.

The morning after, even if you hadn’t heard the news, if you were paying close enough attention you might have seen that the orange paint was marking a crime scene. But we don’t pay close attention- we drive by in our own world, missing the clues of the terrible and painful things happening just past those signs. What signs were there before this murder? We didn’t know this family, but someone must have had clues. What signs may I be missing in those I know and love that they need help? The danger they face isn’t likely as big as what Cynthia faced. But this was such a reminder that I need to open my eyes and be willing to do more.

The children left behind are young adults, and I pray have the support and love of many. There is also still a woman battling for her life in ICU. As I drove by tonight, the cleanup had begun, and family and friends have started to gather.

It’s too late for anyone to help Cynthia. Look around, who might need your help, no matter how subtle the clues or seemingly small the danger? I’m honoring her tonight by asking that of myself, and of you. 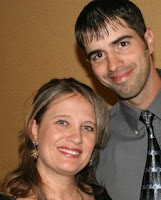 Anita Sullivan is the sister of a missing person, and long time advocate of victims, even before having a personal connection to the world of lost. During college,Anita found a passion for helping others and was involved in a variety of ministries. She then started a career in non-profit, first working with victims of domestic violence and sexual assault. She went on to work with at risk families through a supervised visitation program before spending several years in fundraising and advocacy. She now tries to reach people with a message of Hope through writing and speaking, while honoring her brother, Michael "Austin" Davis, who has been missing since 2007. To learn more about Anita, visit her at losingaustin.blogspot.com.