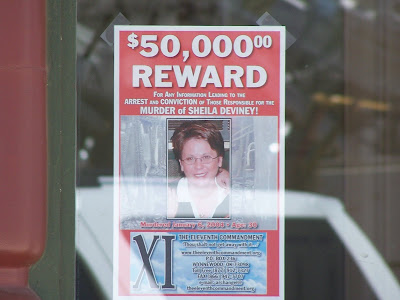 Over 100 poster's on the reward money offered for information leading to the arrest and conviction of "those" (notice the plural here) responsible for the murder of Sheila Deviney were placed in windows of businesses all across town.

Today, more than half of the reward signs have been removed or torn down. I learned that people in the town of Lindsay, Oklahoma have been threatened to "remove the signs or else."

It seems that the ex-husband of Sheila Deviney, resides in Lindsay, OK, and rumor has it that the towering former football star has been " allegedly" threatening business owners to take these signs down or damage could happen to their property. Well I guess if I were a business owner in that neck of the woods, I might be scared, too. I would not want to see my business torched or damaged because I didn't listen. And the towns folk with good reason are scared so they are doing as they are told. Did I mention that this alleged killer is a volunteer little league football coach for the Lindsay, OK school district.

Shiela Deviney, 30, died on January 6, 2004, when her mobile home, located about one mile east and one mile south of Maysville, Oklahoma, burned to the ground. She was murdered. It should be no surprise that Sheila had been married to an abusive, controlling man. They had a court date over past-due child support scheduled the next day. According to eye witnesses, her ex-husband was at the home, although by law not allowed on the premises. He and others according to recorded, notarized and sworn affidavit statements I have in a secure location as of this past weekend from eye witnesses attest to certain individuals leaving Sheila's property as flames jumped into the sky. Witnesses say those person's allegedly destroyed evidence and took items from the home.

Recorded information and facts on this case was also first broadcast in detail on August 2, 2010, during the Intimate Partner Homicide Investigation radio show with Sheryl, McCollum, Holly Hughes.

It seems OSBI, Sheriff Steve Brooks and Garvin County Prosecutor Greg Mashburn have done everything in their powers to keep not only this case, but the Chanda Turner and Tom Horton cases from being re-opened, investigated and those responsible prosecuted. The latest in the Sheila Deviney case is that the state wants to destroy the tissue samples by the year 2012, per this Fox News 25 report earlier in the week: Click Here.

Perhaps someone from the Department of Justice can accompany me on my visit next week when I attend back to back events and press conferences in an attempt to have these 3 murder cases finally open for an official investigation. I would also ask for the State Police to be near by, for I am told, allegedly of course, if I go to Pauls Valley, Oklahoma, I could be carried out in a body bag.

Time's Up folks! I will be in Oklahoma as planned. Justice is long overdue for the intimate partner homicides of Sheila Deviney, Chanda Turner and Tom Horton.


(Susan Murphy Milano, is also with the Institute for Relational Harm Reduction & Public Psychopathy Education for more information visit http://www.saferelationships.com/ and is the author of the new book "Time's Up A Guide on How to Leave and Survive Abusive and Stalking Relationships available for purchase at the Institute, Amazon.com and where ever books are sold.)
at 12:01 AM