Where is Haleigh Cummings? Tommy Croslin is Key to Cracking Case! 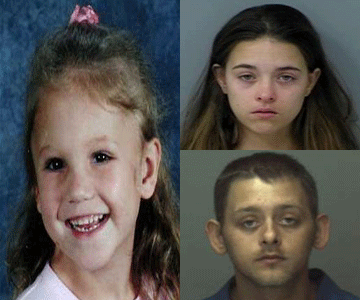 By Sheryl McCollum
With all the theories surrounding the disappearance of Haleigh Cummings – not one involves a stranger!  They all involve the same principle players: Misty Crosling, Tommy Croslin, Joe Overstreet and Ronald Cummings.
Listen to the 911 tape.  The father is NOT out looking for his child.  He makes threats, cusses at the operator, and calls Misty a bitch.  There is no doubt in his mind the child has been taken.
Misty, during this call, can not provide a date of birth, the child's weight nor details of what happened.  She can however describe the “brick” perfectly.
There is a van that was “moved” and had a “scratch” all the way down the side.  Every one of the players had access to the van.  They have all driven it and it would have evidence in it.
Tommy Croslin is Misty’s brother.  He provides no information to police about Haleigh’s disappearance.  He is arrested on a matter not related to Haliegh. Suddenly, he remembers going over to the house the night she went missing.  He states he knocks on the door and no one answers.  People: he places himself at the crime scene!
Then Misty and Ronald marry.  They get separate lawyers.  Misty fails a polygraph.  Ronald is arrested for assault against Tommy.  Misty gets a TPO against Tommy.  Misty and Ronald divorce.  Misty is robbed while buying drugs.  Take time to listen to that 911 call.  She is frantic and scared.  She sounds very different than the 911 call involving Haleigh.
Then all three, Tommy, Misty and Ronald are arrested selling and trafficking drugs!  They are working together.  Some say that Ronald only did the drug sales to stay close to Misty.  Marrying her was not close enough?  He is working undercover on his own child’s murder by selling drugs with the top suspect? They have been in jail since January on multiple charges stemming from the drug bust.
They are searching water where Tommy is known to dump deer carcass.  They took Misty to the dock where she pointed and showed law enforcement the area.  Tommy was in the police car waiting for her.  Tommy is the common factor in every situation.
Tommy talked first. Tommy will talk again.  Time is on the side of justice.  He is the key to the truth.