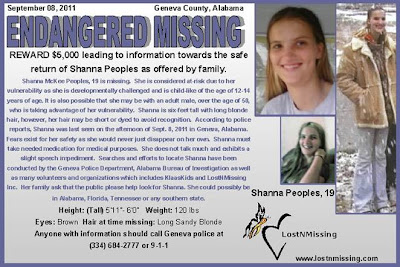 Shanna Peoples, 19, went missing on September 08, 2011 from Geneva County, Alabama.  Her family had a somber Thanksgiving in which an empty chair sat that normally would be occupied by her.  Peoples’s mother, Windy McKee, says “Thanksgiving was not the same.  We really had nothing to celebrate except to pray and ask that whomever is holding our daughter, to please let her go.”  Peoples’s stepfather, Elvis McKee, pipes in “Shanna is a wonderful young woman but she is extremely vulnerable and we believe that someone is either holding her against her will, or taking full advantage of her childlike 12-14 year old mentality. We only want her home where she is safe and so that when she does go out we know who she is with and what their intentions are with our daughter.”  Peoples also is in need of required medication that has not been filled, nor has she made any attempts to give a location to receive her social security checks, which are being held for her at the Social Security Office. 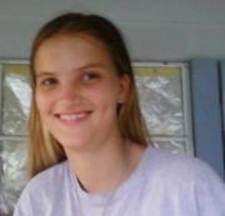 Her parents is on a fixed income and has reached out to LostNMissing Inc, and KlaasKids, both nonprofit organizations that assists families of missing, to help them locate their daughter.  Not a day goes by that they are not out searching, driving up and down streets and talking to people from neighborhood to neighborhood in their search for Peoples.  “It’s like she just disappeared,” Elvis said.  “Initially she befriended an adult male who is nearly 50 years old. “We were not happy about that,” said Peoples’s mom,  “because she is a young woman and needs to associate with those around her own age. He was also quite bossy to her.”  Elvis further adds, “While we know the last sighting was at his home, we do not know if someone may have befriended Shanna, one of his friends perhaps?” If that is the case, Peoples could be anywhere as he has friends with ties in Georgia, Florida, Alabama, Tennessee and even Missouri.  “At this point we are reaching out to the entire United States. Shanna Peoples is easy to spot. She is nearly six-feet tall and that is unusual for a girl.” Elvis said.

A $5,000 reward is offered to whomever provides the information to the Geneva Police Department leading to the safe return of Shanna Peoples, or, information leading to the arrest and conviction of anyone responsible for her disappearance.

In the weeks since Peoples has been missing a search was conducted by KlaasKids as well as a Poster and Balloon event sponsored by LostNMissing Inc.  KlaasKids also attended and along with family, friends and the public they helped to hang missing posters around various communities.  The family asks that the public please look closely at the posters, as “Shanna must be out there somewhere.  The alternative is too incomprehensible,” Elvis stated.   In the meantime Shanna’s parents gaze out at the empty chair at the table and pray that she will be seated there for the upcoming Christmas dinner.  “It just will not be a holiday without her.” Windy cries.

Shanna is 5’11” – 6’0 tall with normally long light brown hair that she colors sandy blonde.  It is possible that she may have colored her hair dark, or black as she has mentioned in the past that it was something she would like to do.  She has brown eyes and weighs 120 lbs.  She cannot read well and does not remember phone numbers or addresses.  She also may want to come home but cannot, or is not physically able to reach out to her family for help.  The family is pleading with the public to please help look for Shanna. 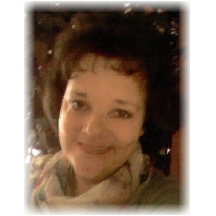