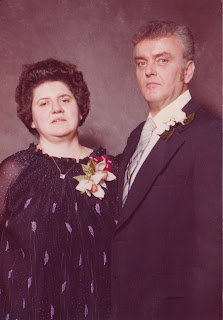 “Phil had a lot to drink,” he began, his red eyes showing the depths of his emotions. “This is difficult for me to discuss the details with you but your mother was found in the kitchen on the floor—she had been shot with a .44 Magnum. The bullet exited out her right eye and onto the kitchen table.” Tom took a deep breath. “After he shot her, your father took a towel and covered her face. He was found in the bedroom and had shot himself. Susan, when was the last time you spoke with him?” For reasons foreign to me, I felt enraged at the question.


“He murdered my mother! Your “superhero” partner murdered her and you want to know when I spoke to him last? You are just as cold and heartless as he was!” I stood up knowing I wanted no part of the conversation. “Susan, wait, calm down!" Tom also stood. “I know you’re upset but there’s no reason to speak to me that way!”


I spun around to face him, a man I’d known since childhood. My face, clearly showing the contempt I was feeling at that very moment, made my father's partner, Tom Flaherty stop in his tracks.

“Bullshit!” I shouted. “All you care about is your buddy and how you can cover up his mess one more time!”

Knowing he had no defense against the spew of accusations, Chicago Detective Tom Flaherty hung his head in shame and left the residence. I stood motionless, staring at the door, wondering if I should scream or cry—or both. I was in shock. My ultimate fears realized, I felt a sense of relief when the police Chaplin returned to speak with me.

“They are preparing to transport the bodies to the morgue,” he said in almost a whisper. “Someone from the police department will call you in the morning to assist you with the funeral arrangements. Susan, is there anything I can do for you?”


In 1989, officer involved homicide was covered up; considered a black mark against a police department. More then 20 years later, after the murder-suicide of my parents, Roberta and Phillip Murphy, nothing has changed. Police Departments release few details, if any, when a wife of a police officer calls 911 emergency assistance because her husband or significant other is abusing and threatening her very existance.


Once the media learn the person responsible for the crime was in law enforcement, the truth of how many calls a victim made for help, what supervior in the police unit she contacted, or how often officers responded to a call that ultimately lead up to the tragedy, is turned inside out by police departments like a badly stained pair of dirty underwear.

Instead of reporting the facts in these cases, we read stories of victim finger pointing or glorified obituaries on how a "veteran decorated officer" served their community with honor and courage.
Kathleen Savio Calls Out For Help 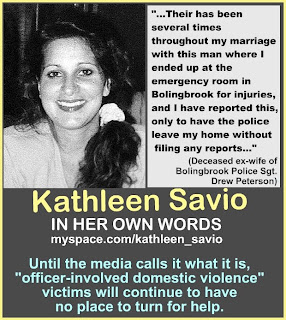 Kathleen Savio's case is but one of thousand's across the country where responding officers failed, protecting the abusive cop instead of the crime victim. If there was ever a case that screamed murder behind the badge, it is Kathleen Savio and, in my opinion, wife number 4, Stacy Peterson.


In 2007, Good Morning America did a story on cops protecting their own as it relates to the Drew Peterson case. The question was posted on private police officer message board sites across the country. Here's what Officers in other states said on these "Officer Only" discussions as it relates to this case:

Officer Comment: I think 18 calls in two years, someone should have seen a pattern. As a patrol deputy I would have. No such thing as professional courtesy when it comes to assaulting a women.

Officer Comment: SOMEBODY HELPED SOMEBODY HERE AND IT MAY HAVE FACILITATED A MURDER. LOTS OF SOUL SEARCHING HERE AND RE-THINKING POLICY INVOLING COPS AND DV.
One of the only sites that cover crimes officers commit in their homes, behind closed doors, is Behind the Blue Wall. The site brings awareness and asks important questions lifting the veil of silence to the growing criminal activity of police officer domestic violence. 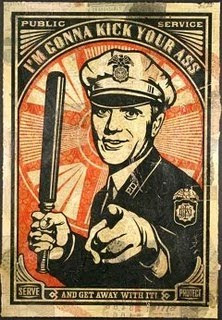 Late last year I was invited to speak at a forum on violence and prevention for victims and their families. I asked that the details of my persoinal background be omitted from the hand-out materials. There was a cocktail reception the night before and I had the opportunity to talk and meet with many of the judges and law enforcement planning on attending my presentation in the morning. I was welcomed with open arms when I mentioned that I was "a police officer's daughter out of Chicago and my remarks would be directed at general officer response, documentation and prearing a case for prosecution." For a moment I was accepted into their world.

The following morning the warm fuzzy feeling would change. Before speaking, a button was pressed and a brief video was played. For that next hour, I had everyone's attention as they sat in their seats. Most were unable to make eye contact with me. Why? For sixty minutes, although it was not enough time, I was able to include in the presentation police officer intimate violence.

The Wives and girlfriends in a relationship with a sworn law enforcement officer have no place to turn for help. And when the media falls prey to the tactics of a slick police department because they are too lazy to do the leg work to establish the truth, they enable the interruption of justice.
at 12:01 AM