PERF's Use of Excessive Force Report 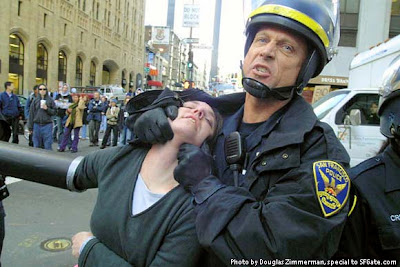 
Last month the Police Executive Research Forum published a report called An Integrated Approach to De-Escalation and Minimizing Use of Force. This is part of its Critical Issues in Policing Series. Thank you to the B&G Report for bringing it to my attention.

This report featured a number of comments from leaders in the law enforcement and mental health communities about how to properly respond to incidents involving people who are mentally ill, developmentally disabled, substance abusers, or have medical problems. If you follow sites that track such incidents like Injustice Everywhere, you will see why there is concern nationwide over how law enforcement officers use force.

Less lethal tools are not always non-lethal. Officers may be trained how to handle calls physically but not mentally. They can go through extensive training on how to go up the use of force continuum but not how to come back down. Being so focused on how to maintain control of a suspect or situation physically, relying on muscle, may mean that officers are inadvertently increasing the dangers to themselves and others by heightening any aggression involved.

While reading these administrators’ comments, I thought about the myths that the public sometimes believes about use of force. Reality is, there are times when nothing else is appropriate but force because lives are in danger. There is no such thing as shooting the gun out of a suspect’s hand or severing a certain tendon in their knee a la Holly Hunter. Someone coming at you with a knife can usually get to you faster than you can draw your weapon– on the list goes. Policing is dangerous and officers definitely need to know how to defend themselves and others.

There is such a thing as overuse of force and it is a problem. I’ve blogged about Christopher Harris, a Seattle-area man whose head was slammed into a concrete wall during a flying tackle from a King County Sheriff’s deputy. You can often find a history of such behavior in the files of cops who do these things and this overkill can become a huge embarrassment to– and liability for– their department.

Several comments in this paper touched on some broader policing issues I’ve either studied or pondered. These have a lot to do with the appropriate use of force, but also with how to run a successful and respectful law enforcement agency.

Indianapolis Deputy Chief Lloyd Crowe said, “And, as with any situation, it is essential for us to have to have the right officer with the right mindset going into these situations. So I think the importance of hiring and selection should not be understated.” Well said. At some agencies there are stereotypes about what an ideal cop is and other agencies hire people who should not be cops.

Is the ideal cop an immaculately dressed applicant with all the right answers? Is it the muscular athlete with the military background? Is it someone with swagger or someone with a quieter approach to interpersonal communications? Is it the academic who majored in an unrelated field or the cookie cutter third generation applicant who’s been part of the lingo and culture their whole life? We need to consider that there is value in diversity.

For many years I’ve had concerns about how troubled and dishonest people cruise through background checks to land law enforcement jobs. Some of these know how to look and act like a department’s preconceived notion of what an employee should be, sociopaths included. Some people know how to flatter, flaunt their personal connections, use sex to get what they want, and practice other shady ways of entering the policing profession. These are often people who use the same tools to gain promotions and wind up in charge of others.

Police departments often run background checks on applicants and do detailed investigations of their personal histories. Thinking back on the psychological evaluation I went through years ago to take a civilian law enforcement job, I can’t believe that the battery of tests administered would actually filter out narcissists and sociopaths. The psychologist in charge was good and our conversation was my first introduction to deviancy among police personalities. But the tools used now seem so pliable including the overrated but venerated polygraph test.

This quote comes from Albuquerque Chief Ray Schultz: “We’ve had a lot of success with hiring civilians, who are all master’s degree level or higher, to work in our Crisis Outreach And Support Team, called COAST. They help field officers to bridge the huge gap between people who are self-medicating or trying to deal with the problems themselves and long-term service providers.”

Yes! Law enforcement needs to utilize the strengths of well-trained civilians to provide maximum benefit to the public. Policing is sometimes seen as a “jock” profession in which only the jocks are allowed to solve crimes, not the “nerds” who work in the office or can’t perform the same physical feats. It can be the so-called nerds who have the best crime analysis skills, or who are best suited to work with victims, or who are most qualified to profile a suspect. Departments need to get away from the stereotypical image of what their strengths look like and start tapping into the civilian talent pool.

Cambridge Commissioner Robert Haas discussed what the report called an essential tool, tactical disengagement: “This goes back to… how easy it is to ramp things up, but much harder to bring them back down. We need to be thoughtful about how officers can de-escalate a situation to get it to a peaceful resolution.” He’s right. This would not only be a useful tool for officers in the workplace but at home.

Some officers perceive a threat and all their agencies train them to do at that moment is ratchet their response up, up, and up. Like a hiker facing a grizzly bear, they might decide to yell and try to appear bigger and scarier than the bear. Some experts, however, advise that hikers should appear non-threatening to bears to deescalate the situation. Trying to be aggressive with a grizzly bear is probably just going to make the bear angry which puts you and everyone around you in mortal peril.

Some officers– please note that the qualifier “some” is used a lot because I know some amazing cops who are excellent at what they do– can never seem to disconnect from the power and control mindset that is infused in them by police culture. Not being willing or able to resolve a conflict by means other than a show of force is how wars happen.

It’s been said that diplomacy is the art of letting someone else get your way and more officers should know how to be diplomatic. They should also have at least some cursory training on how to interact with the mentally ill and others who might pose a challenge. When their default body language and communication skills are abrasive, disrespectful, or aggressive regardless of the situation, they are making enemies, not friends. They could be creating a greater danger than the one that already exists.

Philadelphia Captain Fran Healy addressed this: “They have told us that the instinctive behaviors they encountered by police, such as boxing in or staring, have actually escalated situations, placing officers in incredible danger. We hear from these individuals how the ‘cop mode’ tactics have increased the pressure inside these individuals, causing them to feel like a volcano ready to explode. Nonetheless, the officers are often completely unaware that it is their actions that were creating the pressure or danger.”

Think about that for a moment. Say you’ve had some friends over, it’s getting late, and a neighbor comes up to the fence to ask you to quiet down because their kids are sleeping. If the neighbor starts in with, “Hey! )(**#$*&@!” in a commanding, irate tone of voice with clenched fists, you’re likely to tense up and respond in an irritated manner too.

This is human nature. It revs up the fight or flight response. Add mental illness or substance abuse to human nature and you can get a much more potent, unpredictable cocktail. When all pistons of someone’s brain aren’t firing correctly, you could be taunting a grizzly bear whose primary interest, instinctively, is self-preservation. If you respond rather than react, and use a civil tone when appropriate, you might be able to keep control of a situation better than any other way.

This is an interesting report. I never read the comments of police administrators without considering what officers out on the street might say but found a lot of truth in these insights. Ultimately departments need to invest in appropriate training for their officers and objectively document officers’ interactions. They need to involve outside experts and look to civilians to augment public safety functions. They should be very careful about who they hire and how they handle questionable employee actions.

Most of all, law enforcement agencies need to do what Sheriff Doug Gillespie of the Las Vegas Metropolitan Police Department said, be sure that their culture supports their policies: ”You can have the best policies in the world, but if your institutional culture doesn’t support them, they won’t work.” He’s spot on. A department that values respect, empathy, and professionalism, and that maintains an open mind about how to best serve the public, will have a better chance of surviving potential use of force incidents unscathed physically and legally.


If we desire respect for the law, we must first make the law respectable. -Louis D. Brandeis

Heidi Hiatt, MA is as a Forensic Psychologist.  You can read more of her posts at her personal blog, Truth, Justice, and All-American Allergen-Free Apple Pie Straight Talk in a Crooked World