Actress Jennifer Hudson Under the Bright Lights of Life 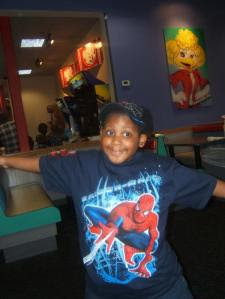 Julian King, Age 7
In Chicago yesterday jury selection began for William Balfour. He's standing trial for the October 24, 2008 murders of Darnell Donerson, 57, Jason Hudson, 29 and Julian King, 7.
Balfour was the estranged husband of Julia Hudson who had threatened her just days prior to making good on his promise because she was ending the relationship. He does the unthinkable after murdering Darnell and Jason, taking Julian who likely witnessed the murders of his grandma and uncle Balfour takes the keys steels an SUV belonging to Jason Hudson and the child's bullet ridden body is discovered three days later in Chicago's West Side Englewood neighborhood.
When neighbors were interviewed and an Amber alert was in effect for Julian, they reported hearing shots fired but no one reported the bang, bang sounds because in this neighborhood the sounds of gunfire are commonplace.
At the very core of these murders stands a daughter, sister and aunt whom in one day, lost her entire world to one man's anger and rage. Yes, intimate partner violence and homicide strikes and erase's lives of families from every social economic level of our society. But when it affects someone famous the world automatically puts on a different pair of rose colored glasses.
Jennifer Hudson's star would rise and fall all in a matter of months. Her rise to the national spotlight on American Idol followed by a nomination and Oscar for her performance in the movie "Dreamgirls," to the fall of her only bright star in her life, her mother Darnell, Jennifer's entire world.
That is what intimate partner homicide does it hijacks those left behind to pick-up the pieces of their lives. Forever, a survivor is changed, their entire world as they once knew it, gone. It affects generations. The following year on August 11, 2009, Jennifer gave birth to a baby boy. Her child will never know the warmth and love of his grandmother, uncle Jason or cousin Julia. This was not some isolated incident, but a planned out execution.
As the trial makes national headlines how about we provide information on those currently living in fear for their lives. How about we direct those in violent relationships to create a plan that includes information at the document the abuse site where victims are directed to create the evidentiary abuse affidavit. They too, are someone's bright star who deserve to end a relationship with their lives!
Time's Up!
Susan Murphy Milano is a staff member of the Institute for Relational Harm Reduction and Public Pathology Education as a educator and specialist with intimate partner violence prevention strategies directing prevention for high risk situations and cases.
A national trainer to law enforcement, training officers, prosecutors, judges, legislators, social service providers, healthcare professionals, victim advocates and the faith based community and author.. In partnership with Management Resources Ltd. of New York addressing prevention and solutions within the community to the workplace. Host of The Susan Murphy Milano Show,"Time'sUp!" . She is a regular contributor to the nationally syndicated "The Roth Show" with Dr Laurie Roth and a co-host onCrime Wire. Online contributions: Forbes : Crime, She Writes providing commentary about the hottest topics on crime, justice, and law from a woman’s perspective, as well as Time's Up! a blog which searches for solutions (SOS) for victims of crime. And the author of the upcoming book "Holding My Hand Through Hell."
at 11:57 PM