Trained in One Battle, Losing Another : PFC Ashley Cecelia Barnes 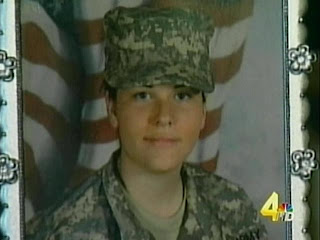 Private First Class Ashley Cecelia Barnes, 18, was a soldier in the United States Army. She entered the Army in September 2008 and deployed to Afghanistan in December 2008. Ashley was an automated logistical specialist assigned to the 7th Squadron, 17th Cavalry Regiment, 159th Aviation Brigade, 101st Airborne Division.
Prior to becoming a soldier, she got married. She finished boot camp and returned home for a brief leave before being deployed. Things were not going well for the new bride and her abusive groom.
Only a short time after Ashley married him, she realized he was violent and dangerous. On November 30, 2008, according to a police reports, the groom Khaleffa Lambert punched and choked her unconscious, and Ashley just knew that "he was not what she wanted in her life." She aspired to have a career in the military minus being a victim of criminal intimate partner violence.
During her tour of duty the new husband and she continued to do battle with finances and words; she decided to get a divorce. Ashley made arrangements to leave her unit, return to the States, obtain a lawyer, file for divorce and then go back to Afghanistan.
On March 7, 2009, the husband stalked Ashley, kidnapping her from a Tennessee Microtel Inn hotel room where she had been staying. He stabbed her numerous times then put her in his SUV and drove off. He was arrested by State Police on the highway because of how he was driving. Police saw Ashley's body in the back seat, and made an arrest. The husband admitted the crime to the officer.
Now, the husband is awaiting trial for the murder of PFC Ashely Cecelia Barnes. He is represented by a defense attorney who filed a motion in court this week to have the history of domestic excluded in the upcoming murder trial. This is ridiculous! The pattern of conduct in this case is very basic in terms of the actual events leading up to her murder. The couple's documented history is a factor. I also question why I did not see any charges regarding felony stalking.
He is caught and arrested with the body. The Prosecutor offers him a deal and he refuses. His defense attorney is arguing the State boxed his client into a corner. I expect my defense attorney friends will be contacting me for this remark. I realize I am not a lawyer, but how cut and dry is this case where they have to remove important facts that resulted in this woman's murder? By the way, do not forget, he murdered a United States Soldier, wife or not.
Even with the evidence and the facts, justice seems to being short changed as it pertains to the life of Ashley Cecelia Barnes. And costing unnecessary tax payer dollars over a case of premeditated murder. Yes, everyone has a right to a trial by jury, but where are Ashley's rights, who has been silenced in the prime of her life? She has no one speaking up for her.
All of Ashley's military training did nothing to prepare her for her own war with a man who was hell bent on killing her. Why? Because she was ending the violence in a peaceful way, and in these relationships of intimate partner violence, without proper training, the victims never win.
A lot could have changed for Ashley if she had completed the "boot camp" instructions in the book "TIME'S UP: A GUIDE ON HOW TO LEAVE AND SURVIVE ABUSIVE AND STALKING RELATIONSHIPS."


The "boot camp" if you will, is for anyone going through a divorce or violent, stalking type of relationship break-up. It is also for attorney's practicing family law. Immediately, before filing for divorce in court, lawyers have the individual complete the paperwork (similar to a last will and testament), the law office witnesses and notarizes the documents, and copies are made. Then the individual reads what was just prepared in the law office before a video camera. Afterwards, the individual follows the rest of the "boot camp manual training" so they are able to stay alive.
In this case, the importance in Ashley completing just the Evidentiary Abuse Affidavit in this section of the manual would have preserved the facts as to the violence and her fear of being killed. I say this because, in my opinion, had she completed the Time's Up manual, her chances of survival would have been greater. Then the lawyer who filed her divorce would have turned over evidence in Ashley's own words and the prosecutor's case would already be over. So far, those who have followed the "Time's Up" "boot camp manual" are still alive.
There is a reason soldiers go into battle properly trained to fight the enemy and stay alive. Ashely Cecelia Barnes was well prepared when she went to fight for our country. Shouldn't the same training have applied to her war in the battle of intimate partner homicide?


Susan Murphy Milano is with the Institute for Relational Harm Reduction and Public Pathology Education. She is an expert on intimate partner violence and homicide crimes. For more information visithttp://www.saferelationshipsmagazine.com/ She is the author of "Time's Up A Guide on How to Leave and SurviveAbusive and Stalking Relationships," available for purchase at the Institute, Amazon.com and wherever books are sold. Susan is the host of The Susan Murphy Milano Show, "Time's Up!" on Here Women Talkhttp://www.herewomentalk.com/and is a regular contributor to the nationally syndicated The Roth Show with Dr Laurie Roth
at 12:01 AM