It's About Time For Ronda Reynolds! 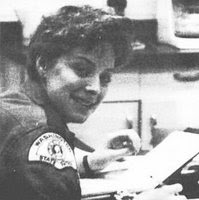 By Heidi Hiatt
Both KING and KOMO News are reporting that former state trooper Ronda “Reynolds’ cause of death was changed from ‘suicide’ to ‘undetermined.’”

It’s about time. For those unfamiliar with the case, Barb Thompson, Reynolds’ mother, has a website dedicated to finding justice for her daughter,http://www.justiceforronda.com/.

Ronda Reynolds was found dead with a gunshot wound to her head in December of 1998. She and her new husband had a terrible argument prior to her death. She had indicated that she wanted to leave the relationship. According to a friend who was helping her, she was packing to do just that.

The circumstances of Reynolds’ death were suspicious and the evidence at the scene seemed to indicate a homicide, not a suicide. Her body had a blanket around it and the gun she allegedly used to kill herself was near her left hand. But she was shot in the right side of her head. It just goes downhill from there.

Her death was ruled a suicide in just a week. A suicide? Really? There is a 75 percent greater chance of homicide when you leave a bad relationship than when you’re in it. This is because even if the abuser doesn’t want you, they want to maintain control. You walking away means them losing control. Reynolds’ death, from an evidentiary standpoint, seems to me to scream loss of control, with cowardly attempts to cover up the truth.

In 2004 my family lost a friend to a similar situation. She wanted out, but escaping the terror her husband caused while pregnant and with three little girls in tow is very difficult. He killed her (and their unborn child) in front of their daughters, then fled the scene. Her family found the girls with her body the next day.

Thank God that the current Lewis County Coroner is bold enough and honest enough to reverse the ruling of suicide. It has taken a dozen years, a brave police detective, and a relentless crusade by a determined mother to get this far.

A note about that– sometimes when people take a public stand against domestic violence (especially within public sector professions), or accuse the government of poor performance or a coverup, they are quick to be branded as attention seekers.

Given the risks involved in taking such a stance, and the criticism, dangers, and stereotyping that comes with it, I can tell you that people don’t do it for fun. They do it for justice. They do it to bring light to the darkness. They might be the only person who can.

Let’s hope that the case will be examined with fresh eyes, that the evidence is thoroughly reviewed, and that if anyone needs to be brought to justice for murder, they are nailed for this. If there is cronyism involved that protected a killer, any involved parties, public officials or otherwise, need to be held accountable for that too.

Let the evidence speak. It talks when the victim no longer can.

Ann Rule just released her book on this case, In the Still of the Night: The Strange Death of Ronda Reynolds and Her Mother’s Unceasing Quest for the Truth,


Here is the full story from KOMO:

When Lewis County Coroner Warren McLeod campaigned for office, one of his promises was to change Ronda Reynolds’ death certificate.

It is his first official act, and it can’t come too soon for Reynolds’ mother.

“Well, you have to take a second and kind of pinch yourself and make sure it’s really real,” said Reynolds’ mother, Barb Thompson.

Thompson has fought numerous court battles and battled with authorities for one thing — to get the stigma of suicide removed from her daughter’s death certificate.

And on Tuesday, she won that battle as Reynolds’ cause of death was changed from “suicide” to “undetermined.”

“It’s like a big burden lifted off your shoulders,” Thompson said.

Reynolds died shortly before Christmas in 1998 of a single gunshot wound to the head. A Problem Solver investigation turned up expert witnesses who insist Reynolds was murdered.

Finally in 2009, Thompson and her experts convinced a judge and jury that Reynolds did not commit suicide.

But Terry Wilson, who was coroner at the time, still refused to change her death certificate.

Now newly-elected coroner McLeod is following through on his promise to change Reynolds’ death certificate.

“We owe a duty to one thing, and that’s the truth,” he said.

Since the 2009 trial, Thompson, along with investigator Jerry Berry and author Ann Rule, have continued to search for new evidence in her daughter’s death.

McLeod says his next step is complete case review to see whether Reynolds’ cause of death on her death certificate should now be changed to homicide.

“We are in search for the truth, and that’s basically what forensics is. It’s science applied to the law and in search of the truth,” said McLeod.

Thompson now has real hope that the truth of her daughter’s death will be uncovered.

“I think if you just keep hanging in there and keep working at it, you’ll finally get the end result that is true justice,” said Thompson.

The new coroner plans to go over all of the evidence in Reynolds’ death, including new evidence unearthed over the past year.
at 12:01 AM