Victim Impact Statements: "Justice cannot be for one side alone, but must be for both" 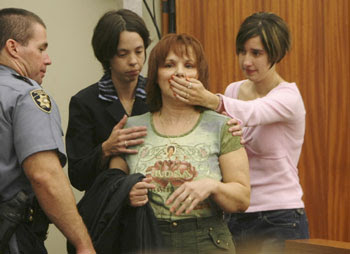 
The title of this piece is actually a quote from Eleanor Roosevelt. It came to mind a couple of weeks ago, when I was scanning the news and saw this article:
'Dry-eyed justice': Judge questions impact of victims on rulings


A ruling by New Brunswick’s top court that declares victims “cannot be allowed to hijack” a trial and chastens a judge so moved by tearful accounts of loss that he doubled an expected sentence is prompting debate over whether it is time to rethink the judicial system’s focus on victims’ rights.
The judgment has victims’ rights advocates warning their voices are being silenced, but has others applauding the court’s appeal for what the judge described as “dry-eyed justice.” Over the past two decades, victim impact statements have become dramatic and compelling features at most criminal trials.

From a totally detached and legal viewpoint, the judicial ruling makes sense: do we want a justice system where emotion overrules fairness and equitable treatment? Defence lawyers certain do not, and the general public understands that such a system would be inherently unstable and unfair. But how do victims feel?

While every victim I have ever talked to wants to ensure the perpetrator gets just punishment for their crime; the word they stress is "just". I've never met one who believed that their victim impact statement should so sway a judge or jury that the perpetrator would be given two, five or ten times the sentence which the law prescribes.

Let's be precise. Victims want to be treated like human beings: they want to be informed and consulted on the progress of the trial and any plea bargains; they wish to be heard, understood, and make a sometimes impassive and uncaring justice system realize the full impact the crime has had on their lives.

They want to see the perpetrator sentenced according to law of the land; they might wish for a maximum sentence, but they don't wish to see the justice system turned on its head.

Victim impact statements are the method by which they attempt to get across to the court the toll the crime has had on their lives.

In general, the courts heavily control what can and cannot be expressed in victim impact statements, how it can be said, and they certainly control when this statement is heard (only after the offender has been found guilty). All this is done to ensure fairness to the offender, and no judge should use a victim's statement to make a mockery of justice.

But, as the title of this piece says, justice can't be for one side alone. While it is just and fair that offenders be protected against overly emotional judges and sentences, there is an area where victims and witnesses are exposed to emotionally devastating treatment. In the name of the justice mentioned above, we need to see this corrected.

As everyone knows, crime victims are often witnesses as well, called before a court to be examined, and then cross-examined, under a set of arcane laws and rules they know little about.

While on the stand, and particularly when undergoing cross-examination by the defence, victims are open to a tactic commonly known as "aggressive cross-examination". Defence lawyers use verbal attack, haranguing and aggressive questioning of the victim in an attempt to cause them to make a verbal mistake, or utter any statement which the defence can then use to argue the victim is lying, was mistaken, or (and this is the worst) somehow deserved to be victimized.

Of course the prosecutor can object if the defence counsel goes too far, but the defence is often allowed wide latitude by the court, which wants to ensure the accused receives a fair trial, and to avoid having judgments overturned on appeal.

The issue here is not only the tactic in itself, but that the criminal justice system as a whole supports the use of such tactics. Many lawyers believe that the use of such a tactic is quite legitimate, supplying the accused with as full and complete a defence as possible... the basic thought seems to be: "If it works, great. If not, it was still worth a try".

Little thought is given to the psychological effects such a tactic might have on an already traumatized victim. Judith Lewis Herman said it best:


"If one set out by design to devise a system for provoking intrusive post-traumatic symptoms, one could not do better than a court of law"

There are certain groups which most courts label as "vulnerable witnesses"; these are offered some protections and extra support. Normally this list includes children, the mentally ill, and victims of sexual assault.

All other adult witnesses -- no matter what their traumatic experiences or mental state, short of incapacity -- are legitimate targets for aggressive cross-examination.

To me, seeing a court system demand dry-eyed, unemotional sentences for the perpetrator, yet at the same time allowing... nay encouraging... the perpetrator's lawyers to verbally attack emotionally vulnerable witnesses to the point of breaking, displays a glaring inequality in the justice system.
The question then becomes, "what can be done about it"?

There is a developing school of criminal justice thought called Therapeutic Jurisprudence. This school of legal thought focuses on creating a criminal justice system which also takes into account the mental and emotional health of all who pass through it.

It examines the roles of lawyers and judges, and suggests they take an interest not only in the law and the rules of court procedure, but in the mental and emotional well-being of their clients.

I would call on criminal justice systems around the world to realize the possibility exists their court systems can deliver as traumatic a blow to the psyche of crime victims as the criminal did in committing the originating offence. Our legal system has developed over centuries, altering and adapting as new sciences technologies came along. It's time to apply the sciences of psychology and mental health to law as well.

In the name of the dry-eyed justice first mentioned above, I'd like to call on courts to begin re-considering their policies and procedures, and take into account the potential traumatic effects they expose victims and witnesses to.

Justice, fair treatment and physical and emotional safety should be guaranteed not only to the perpetrator, but to the victim / witness as well.

For those who are interested in background information on aggressive cross-examination or therapeutic jurisprudence: