Do Women Assault Men as Often as Men Assault Women? 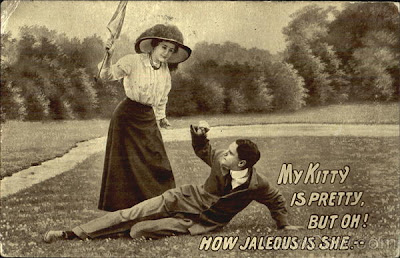 by Barry Goldstein
The first time I attended a NOMAS (National Organization for Men Against Sexism) Conference, a college professor with ties to "fathers' rights" groups made a presentation at the Men's Studies Association. He claimed he had new research, but when he spoke, he instead repeated claims that fathers are mistreated in custody courts and women hit men about as often as men hit women. His "research" consisted of speaking to a bunch of male supremacists complaining about their ex-partners. When it became obvious he had obtained the speaking position fraudulently, Moshe Rozdzial, co-chair of NOMAS and other leaders had the courage to get up in front of the entire conference and stop the presentation. Moshe said he couldn't allow the professor to continue making statements that went against everything NOMAS stands for.

Unfortunately, journalists, academics, grant providers and program planners usually don't have the knowledge and courage necessary to prevent the spread of this kind of misinformation. We frequently see academic studies that claim women hit men as often as men hit women. Journalists often uncritically incorporate these reports into news stories for the same reason they look for man bites dog stories.

Some unqualified researchers seek to determine the relative assaults by men and women by counting the hits. Men tend to be bigger and stronger than their female partners. They hit harder and cause more serious injuries, but these difference are regularly ignored. Men and women also hit their partners for very different reasons. Men hit their partners to maintain control and to be able to make the major decisions in the relationship as they believe they are entitled to do. Women more often hit their partners in self-defense and to stop his abuse. There are exceptions to all of these examples, but generally it is true.

How do we know men and women hit for different reasons? 75% of men who kill their women partners do so after she has left and this is not true of women who kill their partners. The men do this out of a belief system that she has no right to leave him. When society started to address domestic violence issues and made it easier for women to obtain criminal prosecution, divorce, financial support, restraining orders, shelter and community support, the domestic violence homicide rate went down significantly particularly as greater efforts were made to hold men accountable. While the number of women killed by their male partners went down from 1600 to 1250, the number of men killed by women was reduced from 1400 to 550. Why would laws and practices designed to promote women's safety save so many more men's lives? Many women killed their partners because they did not believe there was any other way to get away from him. Once other resources were available, women no longer believed they had to kill him to be safe.

Most important in understanding the difference between men and women regarding domestic violence is that it is extremely common for women to be afraid her partner will kill or seriously hurt her. Women are so afraid that they will give in, do whatever she thinks he wants and let him make the decision just so he won't hurt her. At the same time it almost never happens that men are so afraid that his partner will kill or seriously injure him that he will give in, do whatever he thinks she wants and let her make the decision just so she won't hurt him.

The flawed research also fails to consider sexual abuse between men and women which is almost always committed by men. Rape crisis centers and other services for women are widespread and badly needed in our society. No such services have developed for men because there is no such need. Men sometimes like to refer to Lorena Bobbitt, who cut off her husband's penis, as proof they are also in danger. Imagine what would happen in this society if such assaults were even one-tenth as common as rape. Penis protection centers would have appeared in every community and enforcement of laws against such crimes would be taken far more seriously than rape is.

In focusing on counting the hits or the opinions of abusers, unqualified researchers ignore important information. If the level of female violence was similar to male violence, why isn't this reflected in emergency room visits, domestic violence homicides, murder suicides (92% committed by men) and the need for shelter? Some male supremacists have sought to undermine the work to end men's violence against women by bringing complaints and lawsuits seeking to require shelters and other domestic violence agencies to provide services for men. No one is saying that there are no cases of women assaulting or mistreating their male partners, but such behavior is rare in comparison to male perpetrated abuse. The faulty research claims we don't hear about women's abuse of men because the victims are too embarrassed to seek assistance, but the reality is that women are both embarrassed and afraid to seek assistance, but do so in large numbers because the need is real. For male supremacist groups, the need is political and designed to undermine the work to end domestic violence. Domestic violence agencies are woefully underfunded and the last thing we need is to have some of the limited funds needed to save lives diverted to the illusion that men face a similar risk.

Last year I was at a conference in Hawaii to speak about domestic violence and went to a workshop presented by two female professors who had been students of the conference organizer. They had obtained a grant and conducted research that purported to find women hit men about as often as men hit women. The women were trying to act in good faith and thought they were conducting valuable research. When they described their practices, however it turned out they went looking online for men to interview and from their description it appears they sought to find subjects from male supremacist web sites. In other words, the "research findings" are in reality a repetition of abusers' beliefs. In discussing the fact that the police failed to pursue most of these men's complaints, the professors never considered it might be because there was no evidence to support them and instead assumed it was just because the police automatically discounted allegations made by men. The professors were unaware that in contested custody cases, fathers are 16 times more likely to make false allegations of abuse and police, prosecutors and child protection agencies regularly bring false charges against battered women because they are manipulated by the abusers.

As I was a guest at the conference and did not have the courage of my NOMAS colleagues, I did not try to challenge the presentation other than one question. Instead, after the conference, I wrote the professors an email providing them with research and information about the flaws in their "research." Their response was short, polite and showed no interest in reconsidering any of their mistakes.

The fact is, as we have known all along, men continue to commit that vast majority of assaults and abuse in heterosexual relationships. There is no hidden avalanche of assaults of men by women. The media needs to be more careful about providing both sides to an issue when only one reasonable side exists. There are still those who believe the Holocaust never occurred, the earth is flat, smoking is healthy and women assault men as often as men assault women, but the falsity of these claims are so well established there is no reason to provide a forum for such misinformation. Oh, and if you should see Fido on a picket line with a sign about all the humans biting dogs, I would urge you to paws before believing it.