The tragedy behind the Zhara Clare Baker case 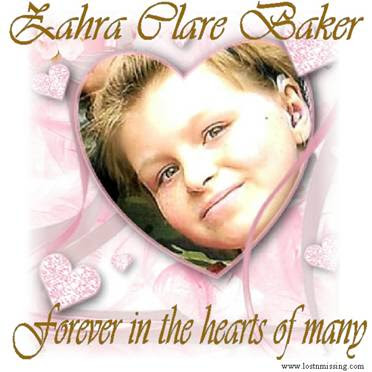 By Cyndi Caron
There are very sad cases everyday that we all read about in newspapers, watch on the news or hear about through word of mouth.  The entire investigation behind the disappearance, and probable murder, of a beautiful freckle-faced bright eyed child named Zhara Clare Baker, age 10,  has gripped the hearts of all who have been praying that the media reports are wrong.  Unfortunately as we know from today’s news conference there is no mistake.  Sweet Zhara has not been seen in over a month and contrary to her father and stepmother’s first accounts on Saturday that she went missing sometime between 2:30 a.m and 2:00 pm when they discovered her gone is completely a fabrication.  The Amber Alert was dropped today, October 12, 2010,  and the case has converted to a homicide investigation.  The entire world is watching and weeping.
Zhara’s father, Adam Baker, is from Australia.  According to media reports he had custody of Zhara since the age of 8 months old when her mother left.  A little over two years ago Adam Baker met a woman online and chose to pack up his and Zhara’s belongings and fled their home country of Australia to reside in North Carolina.  Adam Baker made Elisa his wife and Zhara’s stepmother.  What went on in that home is unclear, however, one thing is for certain…nothing went right for Zhara.  After battling bone cancer and losing her left leg below the knee to the cancer she also endured chemotherapy which left her deaf.  Recently the beautiful brunette with golden streaks in her hair was fitted with hearing aids.  A huge smile on her face she could hear again!  But life for Zhara was not going to improve.  In fact life according to relatives and neighbors was brutal for sweet Zhara.  One relative stated that Zhara was only allowed to come out of her room for five minutes at a time and  witnessed her being hit and beaten.  Neighbors and old school pals stated Zhara was a sweet and shy child who had a huge grin which is evident in all the photographs.  But photographs lie.  This child lived a life of nightmares behind the doors with her stepmother and a father who did nothing to stop the beatings according to another relative.  A MySpace page believed to belong to the stepmother surfaced showing a picture of Zhara with the words "The Dark Child!!! lol." Elisa Baker’s Myspace page, under the username "gothicfairy6668,"  is covered in gothic images including a skull and crossbones background. The section which asks what kind of mood one is in, she proudly wrote "crazy."  I think personally “evil” would be a better choice of words to describe Elisa Baker.


Nobody in the new neighborhood they lived in ever recalled seeing Zhara which leads investigators to determine that it could have been weeks ago when she was killed.  Cadaver dogs hit on the scent of human remains on both vehicles belonging to her stepmother and father.  That beautiful sweet child was murdered and now a massive search is underway to try to trace the steps behind the stepmother and father’s lifestyle with the hopes that a trail will lead them to her earthly remains.  The further tragedy behind this horrible crime is that many people were fully aware of what was going on in the household.  Why didn’t anyone step in and remove Zhara from the home? Obviously somebody contacted Children Services as they show a record that they visited the home, however, no media reports the findings.

A police filed complaint was made by a relative against Elisa Baker, claiming she threatened to kill her and her 7-month-old daughter in a dispute over money. She said Elisa Baker threatened them with a taser and a gun, and she feared for their lives.  In her complaint she stated that Elisa made threats against her infant daughter and she was “screaming and shouting and threatening to hit everybody." The same woman stated she saw Elisa Baker hit Zahra: "She was always beating her. I told her to stop but she wouldn't listen to anyone. That poor girl."  Other neighbors also feared for the Zhara’s safety.  As one neighbor reported, "There were warning signs along the way, but you never want to think the worst.” People need to wake up and realize that yes…the worst does exist. The worst possible outcome indeed existed for Zhara. Her beautiful sweet life was taken away by evil hands and we can only hope and pray that justice will be served.  The song from Martina McBride, “Concrete Angel” comes to my mind and I can’t help but think it represents the horror of what life was like for Zhara.


Tears are certainly flowing from Australia and throughout the United States for a sweet lovely child that many would have given anything to have had the honor to love and care for her properly.  May this sweet child rest in peace, fly with the angels and help to watch over other children who may be living the horrible life of abuse as she did. Our hearts are aching and until Zhara is found and justice is served we will continue to weep.  For those who are aware that a child is being beaten or abused…please, pick up the phone and make that call to the authorities and CPS. Don’t let another child have to leave this earth due to the hands of another.
Cynthia L. Caron
President/Founder
LostNMissing, Inc.
www.lostnmissing.com
at 4:18 PM